After solving a murder at a local restaurant, Quinn Bellandini just wants to get back to her comfortable life running her grandfather’s B&B in Savannah, Georgia, with her sister, Delilah. But those plans get buried when Quinn and her new boyfriend, Tucker Heyward, dig up an old skeleton while doing some landscaping in his aunt Lela’s backyard. Before long, Lela becomes the prime suspect in the thirty-three-year-old unsolved murder of a high school homecoming queen.


Tucker is devastated. But Quinn’s conscience won’t let her risk an elderly woman spending her twilight years in jail for a crime she didn’t commit. And Delilah, bored by the quiet B&B biz, has been itching to do some more investigating of her own.


Soon they’re questioning a growing list of suspects, from nosy neighbors and snooty Savannah socialites to mild-mannered teachers and old high-school friends of the victim—including Quinn and Delilah’s own parents. But no one is safe from a killer who’s totally old school.

This is the second in Southern B & B Mystery Series. In this installment, Quinn and her boyfriend Tucker are digging a fire pit in Tucker's Aunt Lela's backyard when they discover human remains.  The remains turn out the be those of former Homecoming Queen, Esther Sinclair, who disappeared 33 years ago.  After Lela's relationship with Esther all those years ago is uncovered, she becomes the main suspect and is arrested.  That means Quinn and her sister Delilah, along with Tucker, have to step in to figure our what really happened to Esther.  This was a well written cozy that grabbed my attention from the start and kept it throughout the entire story.  I enjoyed the setting of the story, Savannah, Ga, and that the story was set during the Christmas season.  The author is a very talented storyteller, and there were many twists and turns that kept me guessing till the very end.  I really enjoy this series, and I look forward to the next installment in this series.

CAROLINE FARDIG is the USA TODAY BESTSELLING AUTHOR of the Java Jive Mysteries series and the Lizzie Hart Mysteries series. Fardig’s BAD MEDICINE was named one of the “Best Books of 2015” by Suspense Magazine. She worked as a schoolteacher, church organist, insurance agent, funeral parlor associate, and stay-at-home mom before she realized that she wanted to be a writer when she grew up. Born and raised in a small town in Indiana, Fardig still lives in that same town with an understanding husband, two sweet kids, two energetic dogs, and one malevolent cat.

Don’t miss Caroline Fardig’s thrilling Java Jive mysteries, which can be read together or separately:

About Death by Library 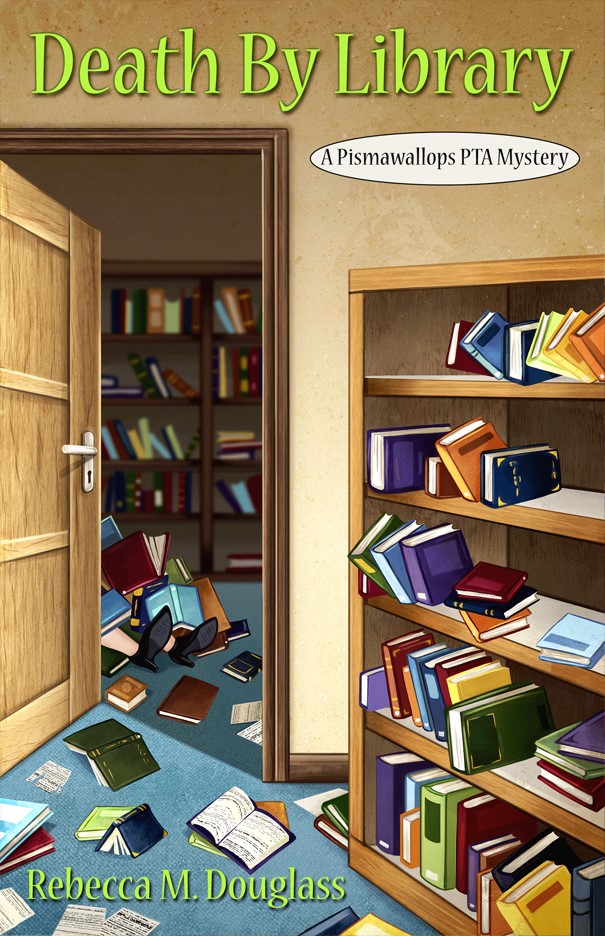 The library can save your life… can it kill you, too?

JJ has a new job at the library, which ought to make her happy. But with all those books to shelve, the PTA to run, and a 16-year-old son to raise, there’s never enough time to spend with her sweetheart, police chief Ron Karlson. That’s especially true with Thanksgiving on the horizon and her mother coming to visit, not to mention the PTA’s Holiday Bazaar looming ahead.

When things turn deadly in the library stacks, JJ needs some answers fast, before she loses her job—or her life. She’s determined to learn everything about the victim, and for once the library doesn’t hold all the answers. JJ and Kitty may have to face the ultimate peril: a visit to Mrs. Halsey, the oldest—and crankiest—person on the island.

This is the fourth installment in the Pismawallops PTA Mystery series and is set on the Pismawallop island in Puget sound. JJ has just started a new job as a librarian and she is trying to raise her 16 year-old son as a single mother. She is also on the PTA and they are trying to get a much needed new swimming pool and one of the members wants a new football field. Also the PTA Holiday Bazaar is looming so this leaves little time for JJ to pursue her romance with Ron Karlson, the police chief. When the body of a a member of the PTA, who opposes the swimming pool is found in the rubble of an earthquake, suspicions arise.  Ron warns JJ not to get involved, but she does not listen.  This book was a fast read that kept my attention throughout.  Even though I have not read the other books in the series, I was not lost. There were a lot of twists in this book and I was not sure who the killer was till the very end.  I enjoyed the setting of this story and I enjoyed that it was set close to Thanksgiving.  Even though I have not read others in this series, I am going to go back and read them as I thoroughly enjoyed this story. 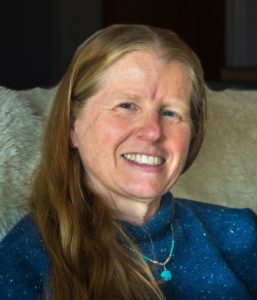 After a lifetime of reading, and a decade or more of slinging books at the library and herding cats with the PTA, Rebecca began to turn her experiences into books of her own, publishing her first in 2012. That failed to quiet the voices in her head, but seemed to entertain a number of readers, so she wrote some more, which generated still more voices. Despite the unlimited distractions provided by raising sons to the point of leaving home (and preparing to move without forwarding address if necessary to retain that empty nest), not to mention the mountains that keep calling (very hard to resist the urging of something the size of the Sierra Nevada), she has managed to pen a total of 9 books so far.
For those who enjoy murder and mayhem with a sense of humor, Rebecca’s Pismawallops PTA mysteries (Death By Ice Cream and Death By Trombone, Death By Adverb, and Death By Library) provide insights into what PTA moms are really like. If you prefer tall tales and even less of a grip on reality, visit Skunk Corners in The Ninja Librarian and the sequels Return to Skunk Corners and The Problem of Peggy. For those who’ve always thought that fantasy was a bit too high-minded, a stumble through rescues and escapes with Halitor the Hero, possibly the most hapless hero to ever run in fear from any and all fair maidens, should set you straight.
Why does Rebecca write so many different kinds of books (there’s even an alphabet picture book in the mix!)? We could argue that it’s because she has a rich lifetime of experience that requires expression in—squirrel!
Author Links