Requiem for a Rescue Dog Queen 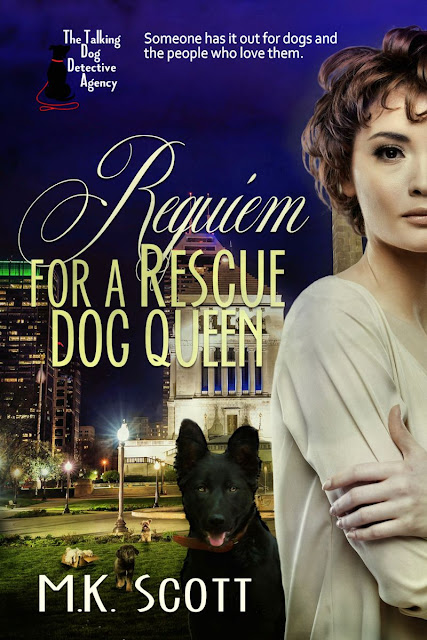 Pre-school teacher turned private eye Nala Bonne, and her opinionated
dog, Max, have a nose for evil doings in Circle City. They’ve recently
gone to the dogs, make that rescue dogs. Not everyone in Indianapolis
has a soft spot for a homeless pup. Someone has it out for the dogs and
the people who love them. A midnight call jolts Nala and Max into action
as they rush to the aid of a local rescue dog queen, but it may already
be too late.

Forget about it and enjoy the moment. Her hair streamed behind her as the boat
picked up speed. Even though it had been a hot Indian Summer day, going this
fast on the water chilled her. The windbreaker she brought just in case would
solve the issue but would cover up the flirty top she’d donned for the date.
Should she be comfortable or becoming?

A loud noise interrupted before she could
decide. The lake remained empty and calm, except for the wake behind the boat.
Using her flat hand as a sun shield for her eyes, she peered toward the shore
to figure out who might be playing the same trio of notes repeatedly. No one on
the shoreline, which only deepened the mystery. It sounded so familiar. In an aha
moment, she realized it was her phone. Unfortunately, the realization forced
her to open her eyes in her dark bedroom.

The red numerals on her clock indicated it
was one-thirty in the morning. It was too late or too early for anyone to call.
The sound stopped when she realized the tune had been the one she assigned to
Karly, her best friend. Karly would only call her this late if it was an
emergency. A cold canine nose touched her hand as she reached for her phone on
the nightstand.

“Go back to sleep, Max. It doesn’t involve
you.”
Even though it was dark and Max was a
black German shepherd mix, she would have sworn the dog cocked his head and
gave her an oh, really look. The damp nose disappeared with the sound of
dog nails on the wood floor as Max settled on the floor. She could hear him
mutter under his breath, “We’ll see.”

Yeah, dealing with a talking dog could be
problematic at times. Her fingers found the phone which now had a glowing dot
on the dashboard for notifications. Before she could call back, the phone rang
again, vibrating in her hand. Karly again.

“Why in the world would you be calling me
in the middle of the night?”

Her friend’s breathless voice gasped out.
“We need your help!”

This one was a little different that what I am used to reading as it has a talking dog it in.  I thought that Max was very charming though and made the story quite interesting.  I thought it was well written and flowed well.  I wish I would have read the first in this series, but I was really not too lost.  The other characters in the book lent to making a stronger storyline.  I thought the plot was well thought out and I was left guessing till the end. M.K. Scott is the husband and wife writing team behind The Painted Lady Inn Mysteries and The Talking Dog Detective Agency.
Morgan K Wyatt is the general wordsmith, while her husband, Scott, is
the grammar hammer and physics specialist. He uses his engineering
skills to explain how fast a body falls when pushed over a cliff and
various other felonious activities. The Internet and experts in the
field provide forensic information, while the recipes and B and B
details require a more hands-on approach. Morgan’s daughter, who manages
a hotel, provides guest horror stories to fuel the plot lines. The
couple’s dog, Chance, is the inspiration behind Jasper, Donna’s dog.
Overall, both are a fun series to create and read.