Scheduled to Death by Mary Feliz 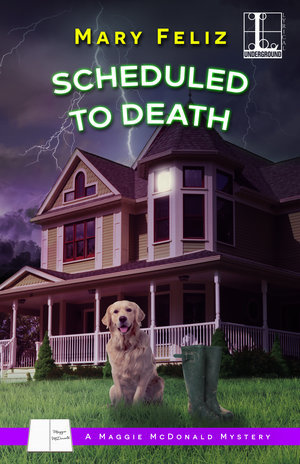 Professional organizer Maggie McDonald has a knack for cleaning up other people’s messes. So when the fiancée of her latest client turns up dead, it’s up to her to sort through the untidy list of suspects and identify the real killer.

Maggie McDonald is hoping to raise the profile of her new Orchard View organizing business via her first high-profile client. Professor Lincoln Sinclair may be up for a Nobel Prize, but he’s hopeless when it comes to organizing anything other than his thoughts. For an academic, he’s also amassed more than his share of enemies. When Sinclair’s fiancée is found dead on the floor of his home laboratory — electrocuted in a puddle of water—Maggie takes on the added task of finding the woman’s murderer. To do so, she’ll have to outmaneuver the suspicious, obnoxious police investigator she’s nicknamed “Detective Awful” before a shadowy figure can check off the first item on their personal to-do list — Kill Maggie McDonald.

*Picture and synopsis from Goodreads

The one word that I think of when describing this book is busy.  There was a lot going on.  When Maggie's client's fiancé is found dead from electrocution in his home, that she is helping to organize, of course she has to get involved.  During her endeavors of trying to find out who was responsible for killing Sarah and clearing Linc’s name, she meets many people, who could be possible suspects.  Of course, Maggie is a very nurturing person, so she moves Linc and his wolfhound Newton into her home while the investigation is going on.  Things start getting dangerous when Linc and Newton are hurt in a bicycle accident.  There are more accidents and of Maggie is right in the middle.  Then she moves some aged out foster children into her home and there is more danger.  Throw in having to deal with a tetchy police detective and it is almost too much for Maggie, but she is persistent and will not give up.  This was a well written book that flowed well and kept me entertained.  Like I said earlier, it was very busy with a lot going on. Of course the ending was a complete surprise and not what I was expecting at all.  I look forward to reading more in this series.
I received a complimentary copy of this book.