Tangled Up in Brew 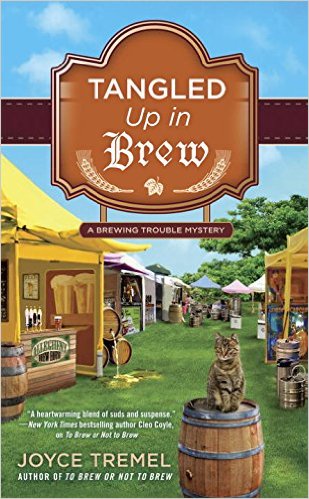 Tangled Up in Brew (A Brewing Trouble Mystery)

.
BEER TODAY, GONE TOMORROW…
Brew pub owner Maxine “Max” O’Hara and her chef/boyfriend, Jake Lambert, are excited to be participating in the Three Rivers Brews and Burgers Festival. Max hopes to win the coveted Golden Stein for best craft beer—but even if she doesn’t, the festival will be great publicity for her Allegheny Brew House.
Or will it? When notoriously nasty food and beverage critic Reginald Mobley is drafted as a last-minute replacement judge, Max dreads a punishing review. Her fears are confirmed when Mobley literally spits out her beer, but things get even worse when the cranky critic drops dead right after trying one of Jake’s burgers. Now an ambitious new police detective is determined to pin Mobley’s murder on Max and Jake, who must pore over the clues to protect their freedom and reputations—and to find the self-appointed judge, jury, and executioner.


What I Thought:
This one caught my attention from the beginning and sucked me right in. I have not read the first in this series, yet, but I really wasn't lost.  It isn't overwhelming with characters so that you get confused about who is who. It is so well written it flowed so well.  I am not a fan of Pitssburgh, but I did enjoy reading about the city and its breweries.  I am also not a fan of brew, but after reading this, I have a better appreciation for those who make it.  There are several possible suspects in this story and Max is a great protagonist.  I was left guessing till the end which is what I like in a cozy.  Looking forward to more in this series, hope it continues. 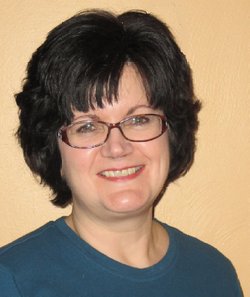 Joyce Tremel was a police secretary for ten years and more than once envisioned the demise of certain co-workers, but settled on writing as a way to keep herself out of jail. She is a native Pittsburgher and lives in a suburb of the city with her husband and a spoiled cat.
Her debut mystery, To Brew Or Not To Brew

has been nominated for the 2015 Reviewers’ Choice award for best amateur sleuth by RT Book Reviews. The second book in the series, Tangled Up In Brew

is scheduled for release in October 2016.