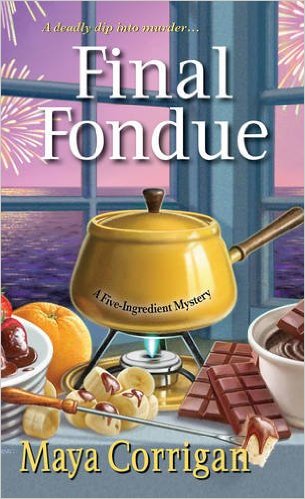 Val Deniston certainly has her plate full running a café, dabbling with recipes, and helping her grandfather prepare for the town’s upcoming tri-centennial celebration, but she’s grown fond of her new life in the Chesapeake Bay town of Bayport. . .
So when Val is asked to reclaim her old position as a cookbook publicist in New York City, she puts off her decision in order to help her grandfather perfect his chocolate fondue for the weekend festivity’s dessert cook-off. But after the opening ceremonies, Val finds a houseguest strangled to death in her grandfather’s backyard. She suspects a classic case of mistaken identity, especially when another guest nearly bids her life a fondue farewell. Now it’s up to Val to keep the killer from making another stab at murder . . .
Includes 6 five-ingredient recipes!

This one grabbed me from the start and sucked me right in, I was hooked from the beginning.  I enjoyed the plot of this story, the characters in this story, and the setting of this story.  There is so much going on, that there is no way to get bored when reading this story.  Val is not sure who the killer was trying to kill, so of course her and her grandfather have to do some investigating, after all, he has to put his new Private Investigator license to use.  This is a page turner that kept me guessing to the very end. 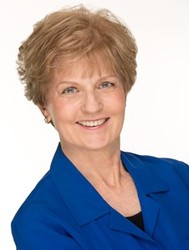 Maya Corrigan lives near Washington, D.C., within easy driving distance of Maryland’s Eastern Shore, the setting for this series. She has taught courses in writing, detective fiction, and American literature at Georgetown University and NOVA community college. A winner of the Daphne du Maurier Award for Excellence in Mystery and Suspense, she has published essays on drama and short stories under her full name of Mary Ann Corrigan.


Where did your idea for a mystery series originate? Why five ingredients? Why not four or six? I often hear those questions about my Five-Ingredient Mystery series. When I decided to write a culinary mysteries, I analyzed popular culinary series. Many of them had cooking professionals as sleuths—chefs, caterers, bakers. I was none of those things, nor did I have experience as a food writer, restaurant worker, or seller of culinary products. I’m just a home cook, but people who come to dinner often ask me for my recipes.


Decades ago, as a Mom with two jobs and two preschoolers, I began collecting recipes with few ingredients for dishes that didn’t take long to cook. After the kids were older, I had the time to make more elaborate meals, but I rarely found complicated recipes with dozens of ingredients worth the time and effort.


My large collection of recipes with few ingredients gave me the theme for my series. I went with five instead of four or six ingredients because it works well with the classic mystery setup, which often involves five suspects. Incorporating five suspects allows writers to explore a variety of motives without requiring the reader to keep track of too many people. In traditional mysteries, five is often the number of suspects that remain when the detective summons everyone to expose the culprit. You’ll find that scenario in many Agatha Christie books, including my favorite one, Five Little Pigs, a perfect example of the classic whodunit.


As long as I had five suspects, I figured why not also have five clues to help the armchair detective solve the mystery. A reviewer of the first book in my series, By Cook or by Crook, said she found five red herrings. That wasn’t intentional, but I must have fallen into a groove. The pattern is holding for the series itself. Final Fondue is the third book in the series. Two more are in the works. As of now, there will be five five-ingredient mysteries.


My sleuth, Val Denniston, left a stressful job Manhattan and now lives with her widowed grandfather in a historic town on Maryland’s Eastern Shore. Val runs a café and solves murders, which she, like other sleuths in cozy mysteries, encounters with amazing frequency. While she investigates, Granddad takes up cooking and pares down her recipes to five ingredients. Each book in the series contains Granddad’s five-ingredient recipes.


In Final Fondue Val and Granddad are preparing for the town’s Tricentennial festivities. He reminisces about the fondue parties of the 1970s and makes chocolate fondue to greet houseguests, weekend visitors to the town’s festival. Chocolate fondue requires only chocolate and cream. Flavorings like vanilla, orange juice, or liqueurs are optional. For a change, Granddad has to add, not subtract, ingredients to get to his magic number of five. The guests are decidedly icy to each other as they sit around the table dipping fruit and cake into the warm chocolate. Later, one of them is murdered while indulging in a private fondue party. Though Val and her grandfather disagree about which of five suspects is guilty, they agree on one thing: the police are wrong about who did it. It’s up to Val and Granddad to keep the culprit from making another stab at murder.