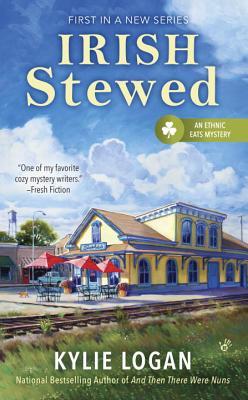 After flopping as a personal chef to a Hollywood movie star, jobless Laurel Inwood finds herself humbled in Hubbard, Ohio, helping her aunt Sophie run her restaurant. Much to Laurel’s dismay, Sophie’s Terminal at the Tracks is not the cozy bistro her aunt would have had her believe—it’s a run-down greasy spoon in an old railroad station. To save the dingy diner, Laurel cooks up a plan to feature alternating ethnic cuisine as specials.

But first there’s the problem of the body in the booth. Slumped over a table with a receipt spike in his back is Jack Lancer—”the Lance of Justice”—an investigative reporter for local TV news. Assisted by the drop-dead gorgeous owner of the neighboring Irish store—who may or may not be a suspect—Laurel sets out to track down a killer who had no reservations about impaling a newshound. But as she turns up the heat, will she end up in the soup herself?

Well this was one that kept me guessing till the very end and it was a total surprise.  Laurel has come to Hubbard, OH to help run her foster aunt's restaurant while she is having knee surgery.  Laurel isn't happy about being there because she is used to being a personal chef for a Hollywood star.  So when Laurel and her aunt find a the body of a local reporter at the Terminal on Laurel's first night in town, Laurel decides to stay for a while.  Laurel suspects a lot of people for the murder, including the gorgeous guy, Declan,  who runs the Irish Shop across the street.  Laurel even suspects her aunt Sophie and the cook at the Terminal, George.  When another local reporter winds up dead because she has stumbled upon who the killer is, Laurel is even more determined to find out who killed The Lance of Justice.  Finally, with the help of Declan, Laurel figures it out and throws a party at The Terminal.

I was totally blown away by what Laurel figures out, because it involves more than just murder.  This one kept my attention from the time I picked it up, till I finished it.  It was well written and the plot was great.  I also enjoyed meeting a lot of the characters and am looking forward to visiting The Terminal again.  I am also curious as to where the relationship between Laurel and Declan is going to go.  This was a great read.