Braking for Bodies by Duffy Brown 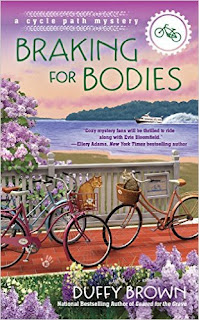 Evie Bloomfield puts the pedal to the metal—in the latest Cycle Path mystery from the national bestselling author of Geared for the Grave.
Moving from Los Angeles to small, picturesque Mackinac Island to work in a bike shop might seem crazy, but Evie knows it’s the best decision she’s ever made. That’s not to say she’s gotten rid of all her stress; after all, the upcoming Lilac Festival has everyone in town riding in circles.
But things really go downhill when a ferry full of tourists—including Evie’s friend Fiona’s former boss, the editor of a sleazy rag in LA—arrives on the island. No one knows why Peephole Perry came all the way to Mackinac, but things aren’t looking good for Fiona when Peep is found dead. Now Evie has to gear up and get a grip on the truth if she wants to clear her friend’s name…

This is the second book in the Cycle Path Mystery Series.  It was just as good as the first, Geared for the Grave.  Duffy is such a great writer that the story flows so well.  I really love this series.  Evie is such a hoot.  She really gets herself into some troubling situations. She is trying to prove that her friend Fiona is not a murdered when Fiona's old boss from L.A. shows up on Mackinac and gets himself done in.  Throw in Evie and Nate planning Erma and Rudy's wedding, Evie has a lot on her plate and it is very interesting how she handles it all, let me just say, there was some laugh-out-loud moments.  I also love the setting of this book, Mackinac Island.  There are so many quirky citizens that make this series so interesting.  But I like Evie the best.  This one had a lot of twists and turns in it that kept me guessing till the very end, and let me tell you, the ending was a huge surprise.  It is also interesting to see where the relationship between Evie and Nate will go. 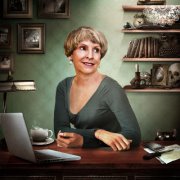 While others girls dreamed of dating Brad Pitt, Duffy Brown longed to take Sherlock Holmes to the prom. Today she conjures up who-done-it stories for Berkley Prime Crime and has two series, the national bestselling Consignment Shop Mysteries set in Savannah and the Cycle Path Mysteries


Braking for Bodies, the second book in the Cycle Path Mysteries is set on Mackinac Island where Lake Michigan meets Lake Huron. There are no cars, lots of horses, even more bikes and a dead body.


Not only is this a problem for the dead guy...who deserved to bite the big one...but for the businesses on the island. If word gets out that there’s a killer on the lose tourists will stampede for the ferry docks and leave!


To avoid financial catastrophe the locals pass the murder off as a mystery weekend at the Grand Hotel. The local police chief is not amused and tried to tell the tourist this is a real crime scene but they’re not buying it and isn’t that hunky policeman a great actor!


It’s hard enough to solve a murder but when the tourists are out to do the same thing and thinking this is all fun and games, mayhem goes right along with murder in a really big way.


So who is this guy that winds up dead right there in front of the Grand Hotel? It’s Peephole Perry all the way from LA and he’s a real piece of work. He got the name Peephole from sneaking around and getting the dirt on celebs in LA. He’d blackmail them and if they didn’t pay up he’d print the info in the Inside Scoop, a rag he owned and edited.


But want is the Peepster doing on Mackinac of all places? A get-away with his mistress? It might have worked if Peep’s wife didn’t show up. Maybe he’s after his fav reporter who lives there and she has the dirt on him and he needs to shut her up? Or maybe someone’s followed Peep all the way from LA and finally did the old sleazebag in?


Mackinac Island looks all calm and peaceful to the tourist but that’s just not the way it is at all. What calm and peaceful place have you visited? What was the thing you enjoyed most about it...or was it too peaceful?


-Geared for the Grave


www.DuffyBrown.com
THE AUTHOR IS GIVING AWAY TWO TOTE BAGS. TO ENTER LEAVE YOUR NAME AND EMAIL, NO EMAIL NO ENTRY.