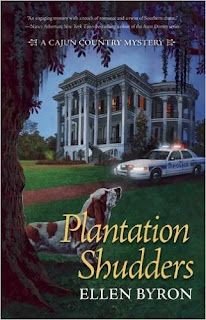 Synopsis:
Check in for some Southern hospitality in Plantation Shudders, the Cajun Country series debut from Ellen Byron.
It’s the end of the summer and Prodigal Daughter Maggie Crozat has returned home to her family’s plantation-turned-bed-and-breakfast in Louisiana. The Crozats have an inn full of guests for the local food festival–elderly honeymooners, the Cajun Cuties, a mysterious stranger from Texas, a couple of hipster lovebirds, and a trio of Georgia frat boys. But when the elderly couple keels over dead within minutes of each other–one from very unnatural causes– Maggie and the others suddenly become suspects in a murder.
With the help of Bo Durant, the town’s handsome new detective, Maggie must investigate to clear her name while holding the family business together at the same time. And the deeper she digs, the more she wonders: are all of the guests really there for a vacation or do they have ulterior motives? Decades-old secrets and stunning revelations abound in Ellen Byron’s charming cozy debut, Plantation Shudders.

What I Thought:
I enjoyed this book from the time I picked it up. I enjoy reading about Bayou country in Louisiana and this had all the culture of that area down to a tee.  The writing was superb and the book flowed really well.  I would love to visit a plantation like Crozat, it seems so charming.  This was a great cozy because it kept me guessing to the very end.  There are a lot of twists and turns in this book that kept me turning the pages.  I look forward to more in the Cajun Country Series.  Great job,Ellen. 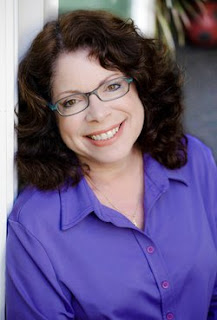 Byron is a native New Yorker who loves the rain, lives in bone-dry Los Angeles, and spends lots of time writing about Louisiana. She attributes this obsession to her college years at New Orleans’ Tulane University. Her debut novel, Plantation Shudders: A Cajun Country Mystery, launches on August 11th.  Her TV credits include Wings, Just Shoot Me, and many network pilots.  She’s written over 200 magazine articles, and her published plays include the award-winning, Graceland.  She is also the recipient of a William F. Deeck-Malice Domestic Grant. She’s the proud mom of a fifteen year-old daughter and two very spoiled rescue dogs.
http://www.ellenbyron.com/
http://www.ellenbyron.com/#!blog/c1in0
https://twitter.com/ellenbyronla
https://www.facebook.com/ellenbyronauthor
https://www.goodreads.com/author/show/23234.Ellen_Byron

You’d think transitioning from writing snappy TV comebacks for actors like Tim Daly and Stephen Weber to creating murderous scenarios in the bayous of Louisiana would be tough. Oddly, it wasn’t.

I began my career as an actress, but given the limited opportunities for someone who was classified as “character pretty” – translation: “We have no idea how to cast you” – I quickly segued into playwriting. My agent told me one day that I had two writing voices: a TV voice and a theatre voice. That TV voice has served me well. I got to write for shows like Wings, Just Shoot Me, and Still Standing, plus a bunch of shows that disappeared pretty quickly. But eventually the “theatre voice,” dormant for so long, began to whisper, “You need to feed me!”
I fell in love with mysteries the summer before ninth grade. I was commuting from the suburbs to Manhattan for a six-week program at the American Academy of Dramatic Arts, and needed books to read on the train. I don’t remember how, but I discovered Agatha Christie, and by the end of the summer I’d read almost everything she’d written.
It never occurred to me that I could actually write a mystery. I dipped a toe in those waters when I was pregnant with my now-fifteen-year-old daughter. As a perk for teaching in the UCLA Extension Writers’ Program, I got to take a class for free, and chose one taught by the wonderful mystery author, Jerrilyn Farmer. I was motivated by rage. Another writer had backstabbed me and I wanted to kill him! Since I couldn’t murder in real life, I decided to do it on paper. But to be honest, what I wrote for that class stank. I tossed it out and stuck to TV.

But about three years ago, a friend started a small writers group and asked me to join. By then my “theatre voice” had turned from a whisper into a yell. I didn’t have any brilliant ideas for a new play, so I decide to take another stab (nice word choice, given the subject matter) at writing a mystery. I fell in love with Cajun Country when I was a student at Tulane University, so I immediately gravitated toward the region as a setting for my book, Plantation Shudders. I created the picturesque village of Pelican, Louisiana – town motto, “Yes, we Peli-CAN!”- and peopled it with a cast of quirky, likeable characters, including protagonist Maggie Crozat, a thirty-two year old artist who’s a little embarrassed that she’s still trying to find herself. I invented two plantations, one a state historical site, the other Maggie’s family’s ancestral home-turned-B&B, and I added the puzzle of a few murders.

These days, I balance a day job pitching jokes and stories for an animated series with writing my Cajun Country mysteries. I’m able to switch gears because I’m totally committed to whichever I happen to be writing at that time. For the first time in years, I get to tap into both my TV and theatre voices. I work days, nights, and weekends. And I’ve never been happier.