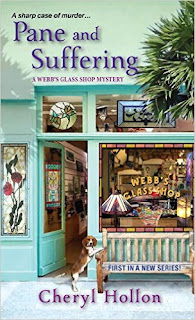 To solve her father’s murder and save the family-owned glass shop, Savannah Webb must shatter a killer’s carefully constructed façade. . .
After Savannah’s father dies unexpectedly of a heart attack, she drops everything to return home to St. Petersburg, Florida, to settle his affairs–including the fate of the beloved, family-owned glass shop. Savannah intends to hand over ownership to her father’s trusted assistant and fellow glass expert, Hugh Trevor, but soon discovers the master craftsman also dead of an apparent heart attack.
As if the coincidence of the two deaths wasn’t suspicious enough, Savannah discovers a note her father left for her in his shop, warning her that she is in danger. With the local police unconvinced, it’s up to Savannah to piece together the encoded clues left behind by her father. And when her father’s apprentice is accused of the murders, Savannah is more desperate than ever to crack the case before the killer seizes a window of opportunity to cut her out of the picture. . .
What I Thought:
This is the first book in a new series that I think has a lot of potential.  I like the setting of a shop that specializes in stained glass and also offers classes on how to make stained glass ornaments.  I thought this book had a great mystery and kept me guessing.  There were also many quirky characters that kept it really interesting.  I was guessing up until the very end.  I also liked that Savannah's father was a cryptographer and he left clues and ciphers about the murders for her to find.  I look forward to the next in this series.
I received a complimentary copy of this book for my honest review. 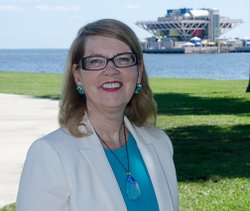 ﻿
ABOUT THE AUTHOR:
Cheryl Hollon now writes full-time after she left an engineering career of designing and building military flight simulators in amazing countries such as England, Wales, Australia, Singapore, Taiwan, and India. Fulfilling the dream of a lifetime, she combines her love of writing with a passion for creating glass art. In the small glass studio behind her house in St. Petersburg, Florida, Cheryl and her husband design, create, and produce fused glass, stained glass, and painted glass artworks. Visit her online at http://cherylhollon.com, on Facebook or on Twitter @CherylHollon.
Purchase Links:
Amazon