Knock on Wood by Linda Johnston, Review and Guest Post 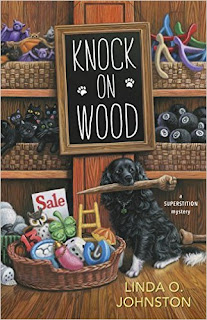 Knock on Wood
(A Superstition Mystery)

Synopsis:
Rory Chasen, now the manager of the Lucky Dog Boutique in Destiny, California, is delighted when her closest friend Gemma Grayfield, a librarian, comes for a visit. But Gemma arrives early and seems upset. It turns out she has broken up with her boyfriend, Frank Shorester. Gemma is soon hired to manage the Broken Mirror Bookstore. Frank follows her to Destiny, where Gemma is also wooed by two local men. Rory may be a little jealous—until one of those men, Deputy Mayor Bevin Dermot, turns up dead. Bevin is known for knocking on wood for everything, but despite Destiny being all about superstitions that did not save his life.
Rory tries to help Gemma clear herself of being a murder suspect, even counting on her lucky black and white dog Pluckie to help. But is Gemma guilty of murder—or of just having a run of bad luck?

This was the first Superstition Mystery by Linda Johnston that I have read.  I really enjoy Linda's stories and this one didn't disappoint.  I learned a lot of new superstitions that I had never heard of before.  I am not one to really believe in superstitions, but it was nice reading about a town that all about superstitions.  Of course the writing in this novel was superb with many twists and turns.  I liked the relationships in this novel also.  This one had me guessing till the end, which is what I like about a cozy mystery. 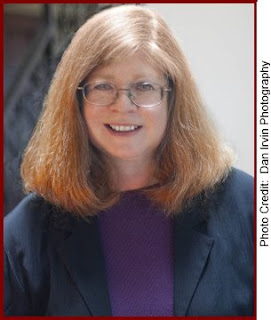 and won the Robert L. Fish Memorial Award for Best First Mystery Short Story of the year.   Since then, Linda, a former lawyer who is now a full-time writer, has published more short stories, novellas, and 38 romance and mystery novels, including the Pet Rescue Mystery Series

, a spinoff from her Kendra Ballantyne, Pet-Sitter mysteries

for Berkley Prime Crime, and Harlequin Romantic Suspense as well as the Alpha Force paranormal romance miniseries for Harlequin Nocturne.  She additionally writes the Superstition Mysteries for Midnight Ink.
Her latest cozy mystery series, the Barkery and Biscuits Mysteries also from Midnight Ink, started off in May with BITE THE BISCUIT

and KNOCK ON WOOD

Last time I visited Melina's Book Blog was in May of this year, when I was on a blog tour to promote my first Barkery & Biscuits Mystery, BITE THE BISCUIT.  Now I'm back since my second Superstition Mystery, KNOCK ON WOOD, has just been published.

In my May post, I talked about cozy mysteries in general--what constitutes a cozy.  One thing I mentioned was that nearly all cozy series contain a theme.  Or more than one.  Those themes can be anything from cooking to crafts to paranormal to pets.  They can be historical or contemporary, holiday-themed or travel-themed.  In fact, the themes can be nearly anything that people find fun and important.

You won't be surprised if I use my own series as examples.  All of my mysteries contain pets, primarily dogs, no matter what the additional themes may be.  In my Superstition Mysteries, superstitions are one important theme, but so are pets.  In the first one, LOST UNDER A LADDER, my protagonist Rory Chasen came to the town of Destiny, California, which is all about superstitions, to find out if they're real or not since her fiance died after walking under a ladder.  With her is her spaniel-terrier mix Pluckie, whom she learns is quite lucky, particularly since she is black and white.  Pluckie saves the life of the owner of the Lucky Dog Boutique, and Rory is soon hired to be its manager--thus continuing both themes into later books including KNOCK ON WOOD.

In my Barkery & Biscuits mysteries, the protagonist Carrie Kennersly buys a bakery from a friend who has to leave town and converts half of it into a barkery--where she bakes and sells some of the healthy dog treats she developed in her other career as a veterinary technician. Thus, the themes are both culinary and pet-oriented.

I also wrote two other series before, the Kendra Ballantyne, Pet-Sitter Mysteries and its spinoff, the Pet Rescue Mysteries.  Again, the themes revolved around pets.  Different animals were featured in each of the Kendra books--although her tricolor Cavalier King Charles Spaniel Lexie, who coincidentally has the same name as my older Cavalier, also a tricolor--of course appears in all of them.  And each of the Pet Rescue Mysteries has a separate underlying theme involved in--what else?--pet rescue.

Do you consciously consider a cozy's theme before you pick it up?  Are there some themes you prefer over others, or some you don't particularly care for?

And of course don't forget the true theme that every cozy contains:  an amateur (usually) sleuth who is (usually) dragged out of her element to solve a murder or two.