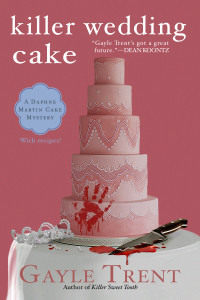 Synopsis:
Daphne Martin’s wedding to Ben Jacobs is only a couple of weeks away. An award-winning cake decorator, Daphne is busy designing their wedding cake. Her twin nephew and niece, Lucas and Leslie, are excited about being in the wedding party. And Daphne’s brother-in-law Jason is planning a bachelor party for Ben. Everything is going beautifully until Daphne’s ex-husband Todd shows up. Just released from prison after serving a sentence based on his shooting a gun at Daphne, Todd comes to Brea Ridge to profess his undying love for her.
Despite Daphne’s attempts to make Todd leave town, he insists on hanging around to reconnect with people he used to know. When he’s found murdered, Daphne finds herself at the center of the investigation. Now she must track down Todd’s killer before she becomes the next victim. Can she still make it to the church on time?
What I Thought:
Daphne thought everything was going great. She had divorced her ex-husband who fired a gun at her and he was in prison.  She moved back to Virginia and started her business of baking goods  out of her home.  She was preparing for her wedding to her old High School sweetheart, she doesn't have time for a murder, especially when the victim is Todd, her ex-husband.  This was a very quick read that will keep you entertained from the beginning till the end.  It will keep you guessing and on the edge of you seat.  I really enjoyed the characters in this story, they were very real.  Great job Gayle.
I received a complimentary copy of this book for my honest review. 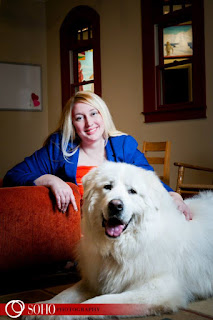 The Author –
Gayle Trent (and pseudonym Amanda Lee) writes the Daphne Martin Cake Decorating series and the Embroidery Mystery series. The cake decorating series features a heroine who is starting her life over in Southwest Virginia after a nasty divorce. The Embroidery Mystery series features a heroine who recently moved to the Oregon coast to open an embroidery specialty shop.

Guest Post:
Writing an Older Protagonist
Gayle Trent
I wouldn’t necessarily describe Daphne Martin as “older”—and please don’t tell her I referred to her as such in the title of this post—but she is older than your typical series heroine. Daphne had just turned forty when she returned to her hometown of Brea Ridge, Virginia in the first book in the series, Murder Takes the Cake.
In Murder Takes the Cake, Daphne is embarking upon the second act of her life. She’s divorced her husband who is serving time in prison after shooting a handgun at her, and she’s retired from her government job in Tennessee. She returns to her hometown after being away for many years, buys a house, and starts a cake decorating business.
While Daphne certainly isn’t in her twilight years like Agatha Christie’s Jane Marple, and she isn’t even as old as one of my other series protagonists, Myrtle Crumb, she isn’t the young woman who heads up most traditional cozy mystery series. When I initially began writing the character of Daphne, I wanted her to be a woman at a crossroads. Like all of us at one point or another, she’s experienced a life event—or more than one—that has made her reevaluate where she is at this particular point versus where she’d like to be. She wants a do-over. And she understands that it’s never too late to start all over and realize her dreams.
Daphne still has a lot of options for her life, but they are becoming more limited. For example, if she and Ben want to have children, they’ll have to do so soon since conception is more difficult and there are more risks for both mother and child when a woman is in her forties. This could add fresh fodder for new mysteries, though, if the couple chooses to investigate fertility treatments and/or decide to adopt a child.
One of the positives about writing an older protagonist is that Daphne has been through a lot and has many experiences to draw upon. She realizes the mistakes she’s made in her past, and she’s not about to let history repeat itself.  She embraces new challenges and enjoys life to its fullest. But she is empathetic when she encounters others who are suffering, and she tries her best to help.
While there are a wide range of ages represented in the Daphne Martin Cake Mystery series, everything is filtered through Daphne’s viewpoint because she’s a first-person protagonist. Still, I hope readers can still feel the excitement and energy of Daphne’s twin niece and nephew and appreciate the wisdom or skewed thinking of some of the older characters.
What about you? Do you prefer your protagonists to be younger? Older? Or does it matter?
Posted by MelinaMason at 12:00 AM