Hearts Made Whole by Jody Hedlund 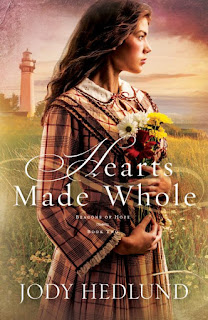 About the book:
Hearts Made Whole (Bethany House, June 2015)

Can she forgive the hurting man who costs her the role she loves?

After her father's death, Caroline Taylor has grown confident running the Windmill Point Lighthouse. But in 1865 Michigan, women aren't supposed to have such roles, so it's only a matter of time before the lighthouse inspector appoints a new keeper---even though Caroline has nowhere else to go and no other job available to her.

Ryan Chambers is a Civil War veteran still haunted by the horrors of battle. He's secured the position of lighthouse keeper mostly for the isolation---the chance to hide from his past is appealing. He's not expecting the current keeper to be a feisty and beautiful woman who's angry with him for taking her job and for his inability to properly run the light. When his failings endanger others, he and Caroline realize he's in no shape to run the lighthouse, but he's unwilling to let anyone close enough to help. Caroline feels drawn to this wounded soul, but with both of them relying on that single position, can they look past their loss to a future filled with hope...and possibly love?

I really enjoyed reading Caroline and Ryan's story.  I found myself rooting for them the whole way through the book.  This book was so well written, it flowed really well and it kept my attention the whole way through.  Caroline and Ryan both had a lot to overcome in this story, but they both put their problems in God's hands.  I liked how they both relied on God and gave him control.  I also liked that Caroline and the others in this story fought for a woman's right to hold a job that was for a man.

About the author:
Jody Hedlund is an award-winning and bestselling historical fiction author. She won the 2011 Inspirational Reader's Choice Award, the 2011 Award of Excellence from the Colorado Romance Writers and was a finalist for Best Debut Novel in the 2011 ACFW Carol Awards. Currently she makes her home in central Michigan, with her husband and five busy children. She loves hearing from readers on Facebook and on her blog.

Posted by MelinaMason at 7:40 PM