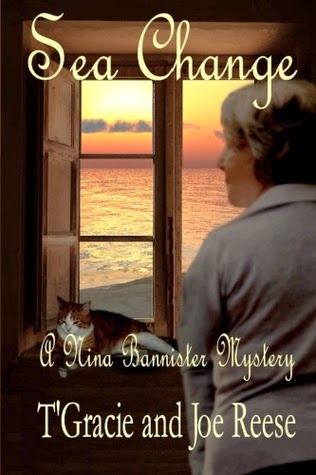 Bay St. Lucy is a sleepy little Gulf Coast community––and that’s the way its residents like it. Most of them generally ignore the monstrous old Robinson mansion that sits in the center of town, until one day, insane old man Robinson dies and leaves the house and its accompanying fortune to the town. The residents are ecstatic and begin planning improved schools and cultural centers. Local retired school teacher and village elder Nina Bannister is sent to the man’s funeral in New Orleans and to represent Bay St. Lucy at the reading of his will. However, Nina returns from her trip saddened to report that a long lost Robinson relative has appeared to claim the entire inheritance. Almost immediately, the new owner––flamboyant Eve Ivory––arrives and announces her own plans to turn Bay St. Lucy into a extravagant vacation resort, not plans that anyone in this small town like at all and ones that will quickly lead to murder.
What I Thought:
We had the choice to review either Sea Change or Sex Change, and I choose the former.  When I started reading this novel, I thought it read like literature.  The authors have a very different style of writing than most contemporary mystery writers.  The setting of this story seems like a nice place, but it is filled with many eccentric characters.  I was kept guessing with this novel.
I received a complimentary copy of this book for my honest review. 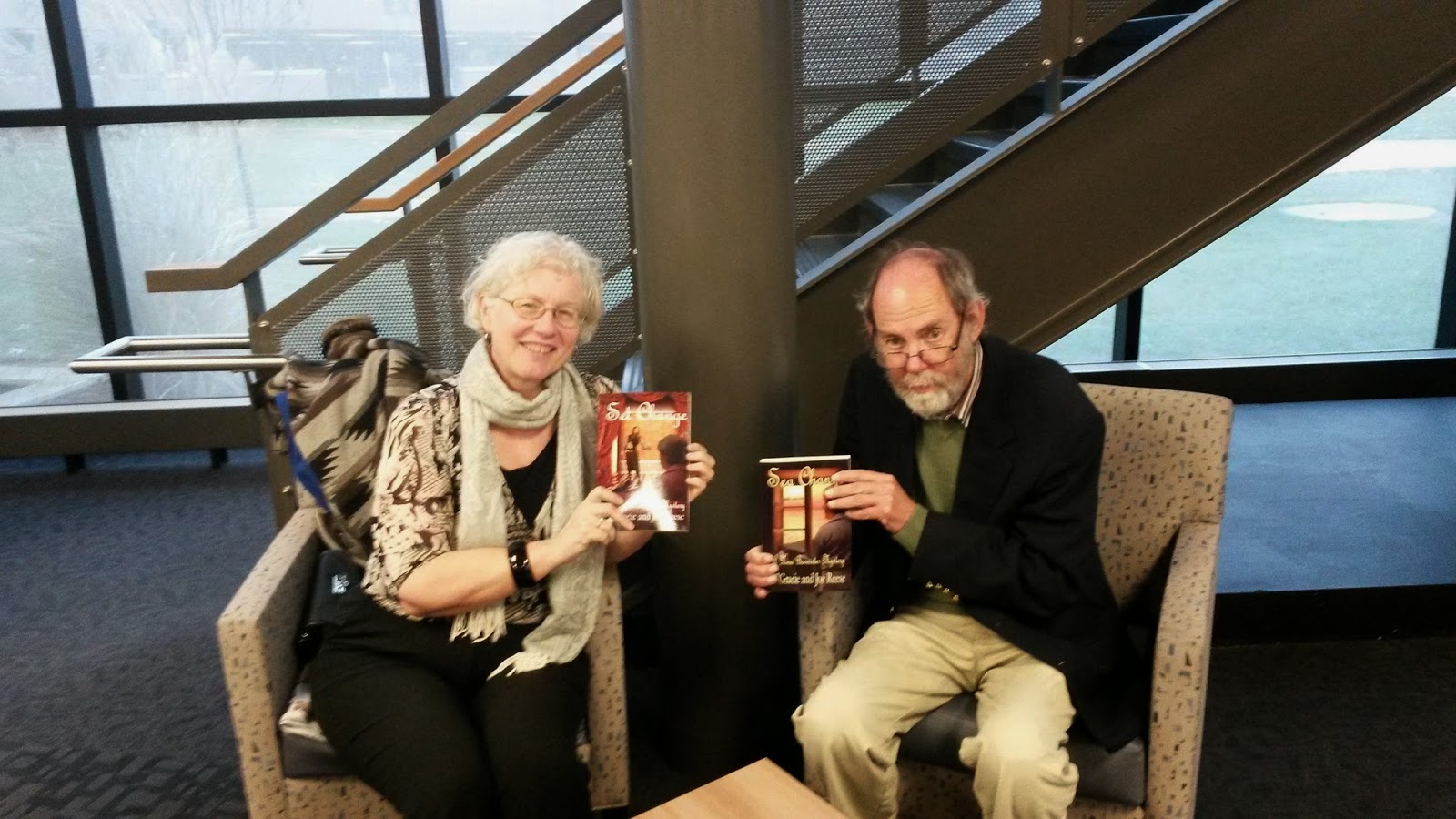 Pam (T’Gracie) Britton Reese is an Assistant Professor in the Communication Sciences and Disorders Department at Indiana-Purdue University at Fort Wayne. She has published books about autism with LinguiSystems. She enjoys teaching and research, but is never happier than when plotting (with her husband) a new murder, or coming up with ways that Nina Bannister can solve it.
Joe Reese is a novelist, playwright, storyteller, and college teacher. He has published seven novels, several plays, and a number of stories and articles. He and his wife, Pam have three children: Kate, Matthew and Sam.
Author Links
Purchase Links:
Amazon

B&N
Other Books In This Series

GIVEAWAY:
THE GIVEAWAY IS FOR ONE KINDLE COPY OF EITHER SEA CHANGE OR SEX CHANGE, WINNER'S CHOICE.  LEAVE A COMMENT WITH YOUR EMAIL AND PREFERENCE,  NO EMAIL, NO ENTRY.  I WILL PICK A WINNER ON MARCH 25.
Guest Post: 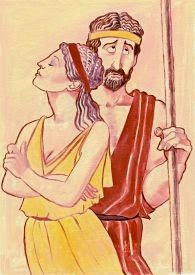 Lysistrata by Aristophanes
Well, readers, Sex Change (it’s not what you are thinking) was inspired by Aristophanes’ Lysistrata. In that comic play a strong-minded woman from Athens, Greece, leads the women of her city state to join with those of arch-rival Sparta to engage in a massive sex strike. Until the men of both communities agree to end the ruinous Peloponnesian War (431-404 B.C.E.) no love making will take place.
In Sex Change Nina Bannister, retired high school teacher and principal, (and amateur sleuth in five other Nina Bannister cozy mysteries), is elected as a replacement candidate for the U.S. Congress when the state’s present representative is killed in a plane crash. To her great surprise, Nina is elected and – to an even greater surprise—she quickly finds that she is not cut out for the lowly life of a newbie, kowtowing to party leaders.  When Nina suggests in an off-hand moment (which is secretly recorded by her young staff and uploaded to social media) that the government would be better run by women, a nation-wide revolution begins, (called the Lissy movement, after Lysistrata) and Nina becomes its figurehead.  Little does she know that a lone, disgruntled man is furious with her actions and intends to get his retribution against her and all her followers.  Can Nina bring about true change in Washington? Or will her nemesis bring about her demise before she even has a chance to start? This all happens when Nina Bannister goes to Washington and national politics undergoes a SEX CHANGE.
This synopsis was written by our publisher, Patricia Rockwell, at Cozy Cat Press. What she doesn’t tell you is that we have toned down the sex that was in the original Greek, but still manage to keep it subtly humorous (and spicy!)
Though Sex Change is pure fiction, and good fun, we hope that it underlines a very serious point: namely, that, although women constitute more than one half of the electorate, they occupy fewer than one quarter of the legislative seats in the US House and Senate. This astonishing fact leads Nina to say, “And they are governing us? Why? Why are we allowing this? WE OUTNUMBER THEM!  What is the matter with us?” These words are echoed by Vote Run Lead, a national non-partisan organization, whose stated mission is to “unleash the power of women leaders in democracy through training, technology and community.”  Could there be a Lissy movement nation-wide? Could Nina’s rant be a preview to an actual national gender revolution? Only time will tell. But during that time, we hope you will enjoy following Nina’s exploits in the nation’s capital and ponder whether the words of one ancient Greek woman could be vitally important to the state of our nation.
Just to say a bit more: Nina is a retired English teacher, but her love of literature—great literature—has not ended with her teaching career. Greek mythology, Roman epics, Elizabethan classics and superb 19th century novels are as much a part of her life as her sea side bungalow and her cat, Furl. These works also, quite naturally, inform the tales of her adventures. Set Change centerpieces a masterful, though fatal, production of Shakespeare’s Hamlet;  Game Change’s Max Lirpa incites a senior English class to a near riot by starting a discussion of Sophocles’ Oedipus Rex. The very first Nina Bannister novel, Sea Change, begins with a discussion between Macy Peterson and Nina about the best way to teach Beowulf. Nina is inspired during her stay in Washington, D.C., by both the words of Abraham Lincoln and Dr. Martin Luther King, Jr.  And, of course, her muse, Jane Austen, supplies the words that always come to her aid when the facts do not seem to make sense and the world is in disarray. During these dark moments she always hears Jane at her side whispering: “A mind lively and at ease can do with seeing nothing, and can see nothing that does not answer.”  T’Gracie and Joe, inveterate teachers themselves, feel that all of us, without literature in our lives, unfortunately have minds that remain lively, but that also remain too much at ease and are satisfied with seeing nothing.
Posted by MelinaMason at 12:00 AM