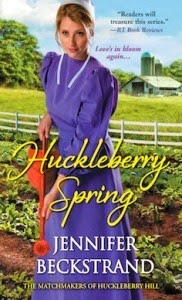 Nothing gives Anna and Felty Helmuth greater satisfaction than seeing their grandchildren happily married–except for planning their next matchmaking venture. And as springtime comes to Huckleberry Hill, Wisconsin, the air is filled with promise. . .

Ever since the Helmuths’ grandson, Ben, abruptly broke his engagement and moved to Florida, Emma Nelson has kept busy tending her vegetable garden and raising award-winning pumpkins. She can put her heartache aside to help Ben’s Mammi with her own pumpkin patch. At least until Ben shows up to lend support to his ailing Dawdi. . .

Gardening side by side with pretty, nurturing Emma is a sweet kind of torture for Ben. She could have her pick of suitors who can offer what he can’t, and he cares too much to burden her with his secret. Leaving once more is the only option. Yet Emma’s courage is daring him to accept the grace that flourishes here, and the love that has been calling him back to Huckleberry Hill.

I haven't sit down and read a good Amish story in a while, and this one was a great one to get me back into Amish books.  I really enjoyed this story, it kept my attention the whole way through.  I really connected with the characters and felt their pain.  This story also had some humor in it.  The interactions between Mammi Anna and Papi Felty were very funny and had me laughing out loud at times.  I really liked Emma, and felt bad for her a lot.  I was so happy with the way this story ended, it was really an uplifting, inspiring story. 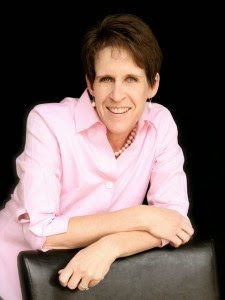 Jennifer Beckstrand Bio:
I grew up with a steady diet of William Shakespeare and Jane Austen. After all that literary immersion, I naturally decided to get a degree in mathematics, which came in handy when one of my six children needed help with homework. After my fourth daughter was born, I started writing. By juggling diaper changes, soccer games, music lessons, laundry, and two more children, I finished my first manuscript—a Western—in just under fourteen years.
I have always been fascinated by the Amish way of life and now write Inspirational Amish Romance. I am drawn to the strong faith of the Plain people and admire the importance they put on enduring family ties. I have visited and studied Amish communities in Pennsylvania and Wisconsin where I met with a bishop and a minister as well as several Amish mamms, dats, and children. It has always impressed me at what salt-of-the-earth people they are. My interactions with these kind people have been some of the most rewarding experiences of my life. I have a dear Amish friend with whom I correspond in Lancaster County, Pennsylvania. She helps me keep my facts straight and gives me inspiration for my stories.
My goal is to write uplifting, inspiring stories with happy endings and hopeful messages. If my books make readers want to give themselves a big hug or jump up and down for joy, I’ve done my job. I am a member of Romance Writers of America and American Christian Fiction Writers and am represented by Mary Sue Seymour of The Seymour Agency.
There are three Amish romances in the Forever After in Apple Lake Series (Summerside/Guideposts). Kate’s Song, Rebecca’s Rose, and Miriam’s Quilt are all now available.
I have six Amish Roamish buggymances in the works with Kensington Books. The first and second books, Huckleberry Hill and Huckleberry Summer, are now available in stores and online. The Matchmakers of Huckleberry Hill is set in northern Wisconsin Amish country.
The series, The Matchmakers of Huckleberry Hill, is about an elderly Amish couple who try to find suitable mates for their grandchildren. What could be more fun than throwing two young people together to see if sparks ignite? No one would ever suspect two octogenarian Amish folks of mischief.
Romantic Times gave Huckleberry Hill 4 1/2 stars and chose Huckleberry Summer as a TOP PICK.
I have four daughters, two sons, three sons-in-law, and two adorable grandsons. I live in the foothills of the Wasatch Front with my husband and one son still left at home.

Felty’s eyes did not stray from his newspaper as Anna Helmuth laid a four-inch stack of brochures on the table next to his recliner.


“Take your pick, Felty,” Anna said sweetly, plopping herself into her rocker and scooping up her knitting. “What kind of surgery would you like to get?”


“Hmm,” Felty said, not paying attention as he perused the death notices.


“Sometimes you squint. Maybe you’d like to get Lasik.”


Felty lowered The Budget so he could spy his wife over the top of it. “What are you saying, Annie-banannie? You think I squint?”


Rocking back and forth, Anna inclined her head towards the thick stack of papers without missing a beat in her knitting. “It’s that purple brochure on the top. I don’t know. You might be too old for Lasik.”


“I’m only eighty-four—not too old for anything.” The newspaper crunched as Felty set it in his lap. He stared curiously at Anna’s potpourri of brightly colored brochures. “What is Lasik, and why do you have a brochure about it?”


“I already told you, dear. You need to pick what kind of surgery you want. Lasik is just one of many choices.”


“Of course you do, dear. Spring is the busiest time of the year on a farm, and I need you laid up and unable to work for at least a month.”


Felty took off his glasses and cleaned them with his handkerchief as if this would help him decipher what Anna was talking about. “You want me laid up for the spring work?”


“What will become of the chickens?”


Anna lifted her eyebrows, pursed her lips, and nodded as a gesture of reassurance. “I’ve got it all worked out. Our grandson Ben will take over the farm while you’re indisposed. And look after the chickens.”


Felty furrowed his brow as if someone had taken a plow to his forehead. “You’re not still scheming to get Ben and Emma Nelson back together, are you? It’s a lost cause, Banannie. A lost cause.”


“Lost causes are my specialty,” Anna insisted as her fingers and knitting needles seemed to meld together in a blur of fuzzy pink yarn. “Ben and Emma belong together, and if anybody can make it happen, we can. We’ve never missed yet.”


“Then what would you call our amazing success matching up our grandchildren?” Anna asked, tilting her head to one side and peering at her husband over her glasses.


Anna shook her head. “No such thing.”


“It doesn’t matter,” Felty said, smoothing his paper to get a better look at the story about pike fishing in North Dakota. “It would take a miracle to get Emma to set foot on Huckleberry Hill ever again.”


“Leave that to me. I have a few tricks up me sleeve.”


Felty frowned as if he’d already lost this debate. “But Ben lives in Florida. What young man in his right mind would trade Florida for Wisconsin?”


“Ben would, if he knew his dawdi needed him. If he knew the farm would fall to pieces without his help.”
“Ben’s got twenty cousins living in Bonduel who could help with the garden and the animals. He’d wonder why we couldn’t use one of the other grandchildren.”


Anna’s ball of yarn tumbled off her lap. “Don’t you worry. I’ll see to it that all of the other grandchildren are excessively busy on their own farms.”


“Now Felty. They all want Ben to come home. If I tell them we’re going to lure Ben with your surgery, the cousins will be perfectly happy to neglect their grandparents. Ben has such a tender heart. He’ll come back when he knows we need him desperately, especially when you’re going to be feeling so poorly after your operation.”


Felty leaned back in his recliner and raised his arms in surrender. “I’m feeling worse already.”