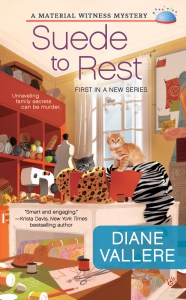 When Poly Monroe was little, she loved playing in her family’s textile store. But after a fatal family tragedy, Land of A Thousand Fabrics was boarded up and Poly never expected to see the inside again. Now, as inheritor of the long-shuttered shop, she’s ready to restore the family business. However her two new kittens, Pins and Needles, aren’t the ones causing a snag in her plans…
Not everyone wants Poly back in San Ladrón, especially a powerful local developer pressuring her to sell—and leave town fast. But even when the threats turn deadly, she’s not ready to bolt. Because Poly is beginning to suspect that the murder behind the shop is tied to a mystery in her family’s unsettled past that she’s determined to solve…before her own life is left hanging by a thread.
My Review:
This was a cozy that kept my attention from the time I picked it up until I finally put it down.  This was a story filled with lots of characters and Diane did a very good job of keeping me guessing.  I had no idea who was behind everything that had happened and was happening to Poly.  To me that is what makes a great cozy.  I definitely want to visit San Ladron again and Poly and all of her new friends.  This was a great start to a new series, and one that won't disappoint you if you pick it up.
I received a complimentary copy of this book for my honest review. 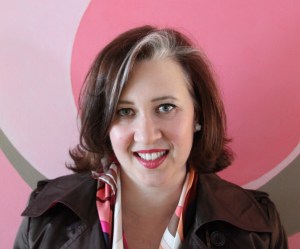 About This Author
After close to two decades working for a top luxury retailer, Diane Vallere traded fashion accessories for accessories to murder. SUEDE TO REST, the first in her new Material Witness Mystery Series, comes out November 4. In addition, she writes the Style & Error Mystery Series, featuring former fashion buyer Samantha Kidd, and the Mad for Mod Mystery Series, featuring Doris Day-loving interior decorator Madison Night. Diane started her own detective agency at age ten and has maintained a passion for shoes, clues, and clothes ever since. Find her at http://www.dianevallere.com/.

THERE IS GOING TO ONE PRINT COPY OF THIS BOOK PER STOP.  JUST LEAVE A COMMENT AND DON'T FORGET YOUR EMAIL, NO EMAIL, NO ENTRY.  SORRY US ONLY.

Once Upon A Time