The Corpse with the Platinum Hair by Cathy Ace--Guest Post 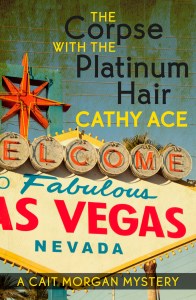 The Corpse with the Platinum Hair
(A Cait Morgan Mystery)

“Look! Somebody’s skewered Miss Shirley to her seat with a silver saber.”
When Cait Morgan arrives in Las Vegas, her only plans are to celebrate a birthday with Bud, her significant other. But then Miss Shirley—a casino owner better known as the “Queen of the Vegas Strip”—is murdered during Bud’s birthday feast. A security lockdown seals Cait and Bud in a private dining room with a corpse, an unidentified murderer, and a group of nervous, potential victims.
As the bodies pile up and tensions mount, Cait’s list of suspects dwindles. Fearing for her life and for Bud’s, Cait knows she must
solve the mystery. But can she reveal the killer before she, too, is mercilessly murdered?
Guest Post:
I’m so pleased to be here today, especially as this Guest Post gives me a chance to talk about something very close to my heart (and, no doubt, the heart of my plus-sized protagonist, Cait Morgan): Las Vegas!
THE CORPSE WITH THE PLATINUM HAIR (Cait Morgan Mystery #4, release date October 14th) is set in Las Vegas, and gave me a chance to think about a place I have visited often in a very different way. I know that not everyone’s been there, indeed, I accept that for some it seems to be a totally horrid place that’s the last place on earth they’d ever choose to spend time. My first visit was back in 2002 and, since then, I suspect I’ve been there about 50 times, so I suppose you could say that I have decided I like it!
My first visit taught me some valuable lessons: each casino is much farther away than you think it is, and walking from one to another in the heat of the day is not a good idea. I’ve visited in every month of the year, and I now know that I prefer April, May, September and October visits. Being almost as much of a foodie as my protagonist Cait Morgan I can attest to the fact that Vegas has some fantastic restaurants, and I’ve visited a good number of them. I have finally settled on the terrace at Mon Ami Gabi (at Paris, Las Vegas) as my favorite place to dine. Breakfast, lunch and dinner, it gives me the best seat in the place—right opposite the dancing fountains of the Bellagio, and with a view of the Strip that’s second to none. It also means I can do my two favorite things at the same time: eat, and people-watch. And what people they are!
As you can imagine, with so many visits under my belt (quite literally it seems, as I do tend to overindulge a bit when I’m there!) I have come to know quite a lot of people who live in Vegas and its environs, rather than just being visitors there.

And that’s what set me thinking differently about the place. Its history, the way it developed, how people who live there feel about it, and what has made it what it is today, are all things I wanted to research, and write about. The archives of the Las Vegas Sun proved a valuable resource; the organization is still headed by Brian Greenspun, the son of its founder, Hank Greenspun (who is referred to in the book) and has both print and TV archives available. It was fascinating to find out about the real people who lived real lives in the Vegas of the 1940’s to the present day, rather than just the (in)famous mobsters whose storied names are always quoted alongside the epithet “Sin City”.
Of course, Ol’ Blue Eyes and The Sands had to be mentioned, along with some other, lesser known people and institutions which have helped mold today’s Vegas—like the Moulin Rouge (the first inter-racial casino) and Miss Sarann Knight-Preddy, or the Nellis Air Force Base and the atom-bomb testing area. Vegas is more than bullets and gambling chips. Today it’s as much about the food as the poker tables, as much about the shows as the slots. And that’s why the type of person who chooses to visit is always changing. Something which, as a people-watcher, I also enjoy.
It’s difficult to wax lyrical about a place that bedecks itself with rhinestones, then tries to tell you they are diamonds, but, you know what? Love it or hate it, Vegas is a very seductive place. For me it’s an oasis of relaxation in a busy schedule, where I get to sit and sip a martini with friends I have come to know well over more than a decade, or to shorten the albeit very gentle Vancouver winter, sharing valuable time with my equally work-wearied husband. For us, it’s a two and a half-hour flight away. For you? It can be within hand’s reach, in the shape of THE CORPSE WITH THE PLATINUM HAIR. Love Vegas or hate it, you might see it a little differently when you’ve read this book.
Thanks for letting me witter on about Vegas – I appreciate it! 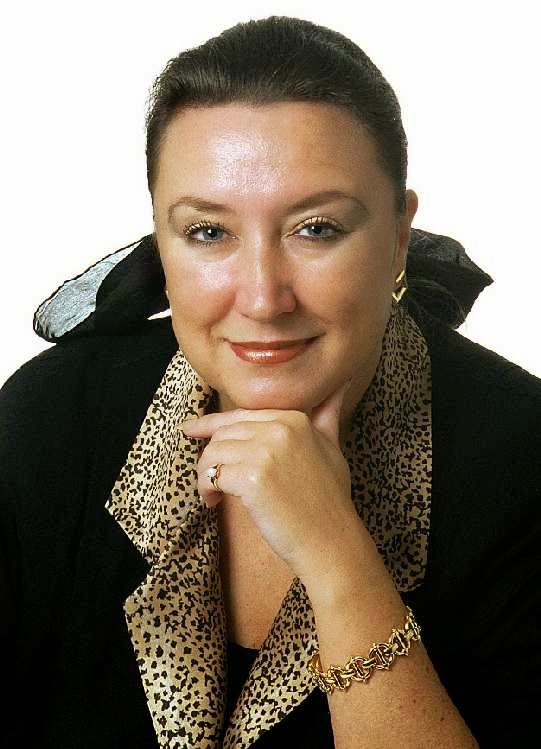 Originally from Wales, now-Canadian Cathy Ace writes the Cait Morgan Mysteries. In The Corpse with the Silver Tongue her foodie criminologist sleuthed in the south of France. The Corpse with the Golden Nose found Cait sniffing out a killer in BC’s vineyards. The Corpse with the Emerald Thumb met her when she was meddling in murders in Mexico. This time Cait is caught up in a true closed-room mystery in a classy casino restaurant in Las Vegas. When not helping Cait solve traditional, closed-circle mysteries, Cathy’s a keen gardener, ably assisted by her green-pawed chocolate Labradors.
Website:  www.cathyace.com
Facebook: https://www.facebook.com/pages/Cathy-Ace-Author/318388861616661
Twitter: @AceCathy
GoodReads: https://www.goodreads.com/author/show/3913679.Cathy_Ace
Purchase Links
Amazon