Mission to Murder by Lynn Cahoon, Review and Guest Post 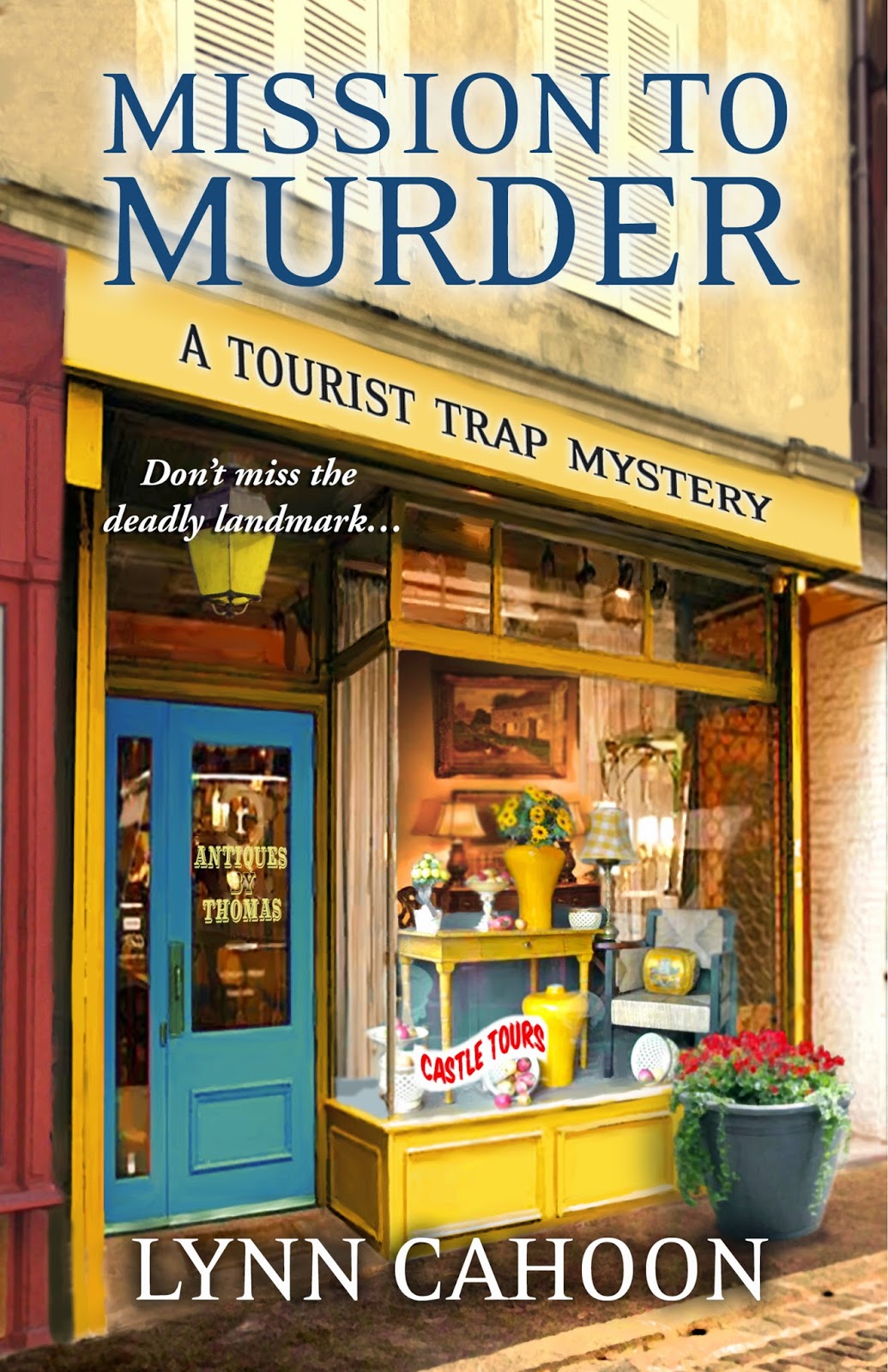 In the California coastal town of South Cove, history is one of its many tourist attractions—until it becomes deadly…
Jill Gardner, proprietor of Coffee, Books, and More, has discovered that the old stone wall on her property might be a centuries-old mission worthy of being declared a landmark. But Craig Thomas, the obnoxious owner of South Cove’s most popular tourist spot, The Castle, makes it his business to contest her claim. When Thomas is found murdered at The Castle shortly after a heated argument with Jill, even her detective boyfriend has to ask her for an alibi. Jill decides she must find the real murderer to clear her name. But when the killer comes for her, she’ll need to jump from historic preservation to self-preservation …
My Review:
I really enjoyed this book, it kept my attention from the time I started reading till I finished it.  It is a fast read that flows well.  The writing in this book is superb and it is filled with likable and realistic characters.  I also liked the setting of this book, as I love settings that are by the ocean and the beach.  This is the first book by Lynn Cahoon that I have read, but it won't be my last as I have her first book in this series in my TBR pile.  If you are looking for a fast-paced, page-turner that will keep you guessing till the end, then this is the book for you.
Great job, Lynn.  I received a complimentary copy of this book for my honest review. 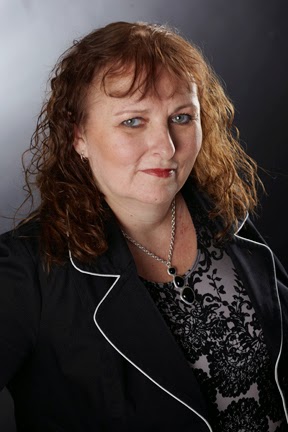 USA Today and New York Times, best-selling author, Lynn Cahoon is an Idaho native. If you’d visit the town where she grew up, you’d understand why her mysteries and romance novels focus around the depth and experience of small town life. Currently, she’s living in a small historic town on the banks of the Mississippi river where her imagination tends to wander. She lives with her husband and four fur babies.
Goodreads -http://www.goodreads.com/author/show/5857424.Lynn_Cahoon
Twitter - https://twitter.com/LynnCahoon
Facebook -https://www.facebook.com/LynnCahoonAuthor
Website - http://lynncahoon.wordpress.com/
Amazon author page - http://www.amazon.com/Lynn-Cahoon/e/B0082PWOAO/ref=ntt_athr_dp_pel_pop_1
Purchase Links:
AMAZON

Some people like to hear their own voice. That jewel of wisdom hit me as I filled the coffee carafes for the third time. As chamber liaison, I’d volunteered my shop, Coffee, Books, and More, to serve as semi-permanent host site for South Cove’s Business Basics meeting. The early morning meeting was scheduled to run from seven to nine but the clock over the coffee bar showed it was already twenty minutes past. With more items to cover on the agenda, we’d be ordering lunch, maybe dinner, before the end.
All because the newest committee member, Josh Thomas, owner of the new antiques store down the street, had issues. He didn’t like the agenda, the city’s promotion plan, and he especially didn’t like the fact the city didn’t have a formal animal control office. These subjects were not part of the regular list of discussion topics for the eclectic mix of owners of gift shops, art galleries, inns, and restaurants. I usually loved feeling the creative energy and listening to wacky ideas members brought to the table. Today, the meeting droned on and I couldn’t wait for it to end.
“I wonder why he even moved here,” Aunt Jackie fake-whispered to me as she sliced a second cheesecake. “He hates everything.”
“Hush.” I elbowed my aunt, trying to quiet her.
“Jill Gardner, don’t tell me you weren’t thinking the same thing.” She started plating out the cheesecake.
A couple of the council members snickered, and Josh’s face turned a deeper red than normal. His wide girth barely fit into the black suit he wore. From what I could tell, he wore the same threadbare suit every day. Watching the buttons on his off-white shirt, I worried one would pop off each time he took a labored breath.
“As I was saying, we must press the police department to deal with felonious teenagers running the streets.” Josh didn’t acknowledge he’d heard Jackie, a tactic I’ve often used with my aunt. She’s overbearing, opinionated, speaks her mind, and I love her to death.
“There’s no problem.” Sadie Michaels replied, the words harsh and clipped. “There’s not a lot for kids to do around here, so they hang out at the park. They don’t cause problems for local businesses. We’ve raised them better than that.”
“I beg to differ. Craig Morgan, the manager over at The Castle, has caught kids breaking in after-hours. They’ve been having drinking parties, swimming in the pools, and he’s even caught a few couples in the mansion’s bedrooms, doing heavens knows what.” Snickers from the rest of the members floated around the room as Josh wheezed in another breath. “We must stop these criminals before there’s real trouble. The antiques housed at The Castle are priceless.”

I’m always asked if my characters are based on real people, mostly me.  One friend asked me if I was Aunt Jackie in the Tourist Trap mysteries. (If you haven’t read GUIDEBOOK TO MURDER (yet)– Aunt Jackie is in her seventies and I’m not.) I didn’t un-friend her for asking. J


But there are similarities between Jill and I so I thought I’d set the record straight.


Jill and I share a last name. Or at least we did. Gardner is my maiden name.  I was a Gardner, then a Salisbury, and now a Cahoon. I’m always going to be a Gardner and I’m glad to share the name with my heroine. (I had a fortuneteller ask during a reading if I liked working in the garden, I believe she was picking up on my former name…)


We both love reading. Of course, she owns a book store/coffee shop combo and I work at an administrative job in the automobile industry when I’m not writing stories.  I think Jill got the better of this trait. I’ve always been a reader, or at least since I got glasses in first grade.  I remember being surprised at returning home with my new specs and seeing the kitchen floor had spots on the linoleum.  Yes, I’m blind without my lenses.


We both have an Aunt Jackie who loves to travel. That’s where the similarities stop. Jill’s Aunt Jackie is a character, loving life and, now, tolerating Josh Thomas.  She ran a coffee shop in San Francisco as her EDJ (evil day job.)


OMG, we both love a good potato soup.  Diamond Lille’s has the best loaded potato soup on the central California coastline. I make a mean sausage and potato soup (think Olive Garden knock off) to which I add drop dumplings to the pot.  Yum. A great soup for wintery Saturdays where all you have to do is read.


And sadly, we both fight with naturally curly hair with a mind of it’s own. Although as I age, my hair had become easier to control.


Jill was a family law lawyer before she cashed in her life savings to open Coffee, Books, and More in South Cove.  I took the LSAT (law school entrance test) then let my ex-husband talk me into going straight into a job with the state.


Jill loves to run. You may see me walking, but if I’m running, call 911 because someone’s chasing me.


I’m more of a thinker than a doer. Jill goes where no (wo)man has dared to go before.  She’s strong and willing to give the shirt off her back for a friend.


Jill manages the council’s Business to Business community partnership.  I started my career in public service, worked in the non-profit field, then in medical services, and now, finally, in private business.