Maltipoos Are Murder by Jacqui Lane Review and Guest Post 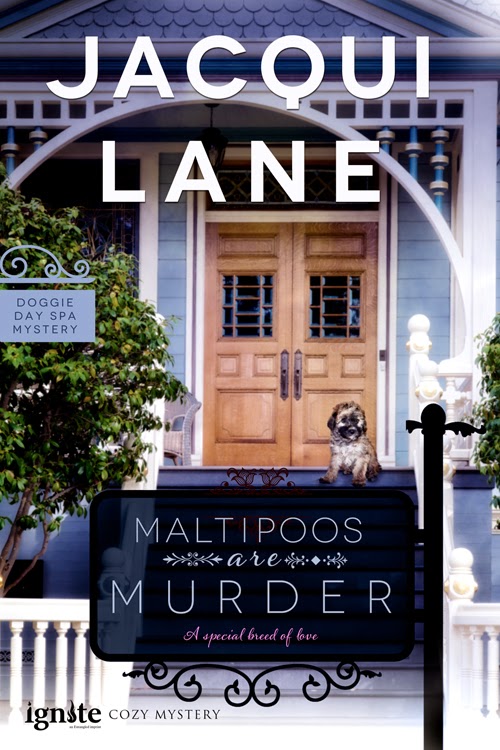 
Release Date: 5/27
Synopsis
Can a murder investigation keep these opposites from attracting?

Cara Rogers wants a fresh start after a slew of bad luck in Washington DC. Moving to Virginia to help her aunt run La Maison de Chien, a doggie spa, is just the peace of mind she needs. No stress. Just her aunt, the dogs, and wide-open country.
But when she finds Aunt Marian floating in the doggie swimming pool, the rest she so desperately needs flies out the window. The only witness to the death is Rex, an apricot maltipoo, and while he may not be able to talk, he’s communicating the only way he knows how—one paw at a time. And Rex’s clues lead to murder.Can Cara keep the doggie spa afloat, convince Middleburg homicide detective Cole Sampson that Aunt Marian’s death was no accident, and keep Rex from the killer’s clutches before they all end up as dead as dogs?

If I could afford it, I would take my dogs to La Maison de Chien, even though there was a murder there.  This seems like a very cool place for dogs.  I really enjoyed this cozy.  It was just the way I like a cozy to be, the killer is someone you don't suspect at all.  I love when a writer does that with a cozy.  I also liked the characters in this story.  I was very well written and was very fast read.  It flowed really well.  Once I started it, I couldn't put it down.  The only bad thing, it wasn't long enough, lol.  Great job!

Jacqueline Corcoran and Lane Stone have teamed up to write about some of their favorite topics – dogs, mysteries, and Middleburg, Virginia, which is known as the nation’s horse and hunt capital.  MALTIPOOS ARE MURDER is the first in their doggie day spa romantic suspense series.
Jacqueline Corcoran lives in Arlington, Virginia with her rescue animals, husband, and two children. She holds a Ph.D. in social work and is on faculty at the Virginia Commonwealth University. She has published numerous professional academic articles and fourteen books in her field.  Her mysteries include Maiming of the Shrew (Cozy Cat Press), A Month of Sundays (Whimsical Publications), Backlit (Etopia Press), and Memoir of Death (Etopia Press).  See her website athttp://www.jacquelinecorcoran.com/
Lane Stone and her husband, Larry Korb, divide their time between Sugar Hill, Georgia and Alexandria, Virginia.  She’s the author of the Tiara Investigations Mystery series.  When not writing, she’s usually playing golf.   Her volunteer work includes raising money for women political candidates and conducting home visits for A Forever Home, a dog foster organization.  She is on the Political Science Advisory Board for Georgia State University, and she serves on Sugar Hill’s 75th Anniversary Planning Committee.  www.LaneStoneBooks.com
Author Website: http://jacquilanebooks.com/
Author Twitter:  http://twitter.com/JacquiCLaneS
Author Facebook: https://www.facebook.com/JacquCorcoraniLaneStone
Purchase Links
Amazon

Since I was a teenager, I’ve loved writing craft books, and I’ve picked up many tips along the way.  What are some of the best tips I’ve learned?  Here is a list of the books and the “best of” from them.

Writing the Breakout Novel Workbook by Donald Maass and the other Maass books, Fire in Fiction and Writing Twenty-First Century Fiction.  I like the Maass books because they offer ways of writing that are non-linear.  I don't like books that have you outline each scene in a mechanistic way, because I’m more on the pantsing side of the plotting equation.  The Maass books rely a lot on reversal.  Think of an idea, and then reverse it, have the opposite happen, or have the opposite motivation for a character. I rely regularly on reverse brainstorming for when I’m stuck on “what happens next?”

Another tip I use regularly from Writing the Breakout Novel Workbook is to describe the quality of light in a scene.  It’s unique writing advice and, if you think about it, light is present in every moment we’re in, and it can set the mood for your scene.

A dialogue tip I’ve gotten from Fire in Fiction is to limit lines of dialogue to five words.  No one wants to read speeches, and this forces you to do the snappy dialogue thing.  Another dialogue tip Maass gives is to only have one character speaking and the other responding through body language alone.  This forces you to rely on non-verbals for communication.  When you revise, you’ll put in more dialogue typically but it helps for me with first draft writing to get down some interesting ways of portraying character exchanges.

Elizabeth George’s Write Away.  Elizabeth George is one of my favorite mystery novelists, and I was delighted when she came out with a writing craft book.  The tip I like best in Write Away comes from how Elizabeth George describes her process.  She writes in present tense, summarizing what is going to happen in a scene, and then goes back and writes it as a scene later.  I’ve adopted this technique because I find that figuring out what’s going to happen can really be difficult, and at least this way, you know where you’re going and are not just stumbling blindly around in the dark.

The Art of the Book Proposal by Eric Maisel. I write non-fiction as well as fiction and in the The Art of the Book Proposal, he has a great technique where he takes the reader through all the ways you can approach a non-fiction work from the secular to the spiritual, from the formal to the more colloquial.  It really gets you thinking about different angles on how to structure a book, and I have used it for my fiction as well.

Word Painting by Rebecca McClanahan. This is a wonderful book about crafting descriptions.  Each chapter ends with a list of exercises that have you try out the material that was discussed.  One of my favorite exercises is switching the lens.  I can start with interior monologue within a character, then have the character focus on something close up, and then switch to looking at something faraway.

Writing Dialogue by Tom Chiarella. I haven’t picked this one up in awhile but it has given me some invaluable lessons on writing dialogue, such as not having characters ask each other “why?”  I write mysteries mostly and questioning and determining motivation is a stock part of how to figure out who committed the murder.  But I learned that you don’t have to rely on questioning all the time, and that making statements instead can make the dialogue much more interesting, less obvious and linear.  The author also poses an exercise in which each character has his or her own direction and agenda for the dialogue that is not necessarily linked to what the person before has said.  I still do this exercise at times in order to make a section of dialogue more snappy and interesting.

What are your favorite tips that you’ve incorporated in your writing that you originally learned from writing craft books?