I’ve always had a soft spot for pulp novels and super heroes. As a kid I’d rush home from school to watch episodes of Batman. Kooky villains like Mr. Freeze and the creepy Penguin aside, I liked the bat fight words zap, pow, and crunch that practically popped off the TV screen like a coked up jack-in-the-box.

As an adult I’m still seduced by the sensational; the over-the-top elements of books like The Da Vinci Code and the gadgetry and high adventure hijinks of Mission Impossible movies.

The more improbable the plot and the more outlandish the device to accomplish it, the more I like it. 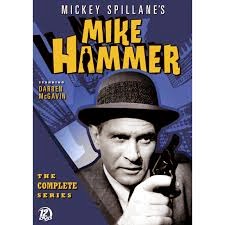 So it’s no surprise that as a crime fiction author, I’m influenced by Mickey Spillane, the master of pulpy, in-your-face detective fiction. Spillane’s Mike Hammer is as close to a comic book figure as you can get without pen and ink. That’s no coincidence: Spillane originally wrote Mike Hammer as the comic book character Mike Danger.

Hammer’s name is appropriate--a take no prisoners moniker with no room for ambiguity. Hammer hits first and possibly ask questions later. Much later.

"I don't want to arrest anyone. I just want to shoot somebody." -- Mike Hammer

Mike Hammer is as hardboiled hero as you will find. He is brutal; filled with a fury that holds everything and everyone in contempt. His only guiding light is his quest for justice in the extreme.

I find parallels to Mike Hammer in Lisbeth Salander, Stieg Larsson’s violent, truth-seeking heroine first introduced to readers in The Girl With the Dragon Tattoo. Critics have argued that Lisbeth is mentally ill; possibly autistic or even sociopathic—labels that could also be applied to Mike Hammer.

Yet popular literature and media loves violent sociopaths. How else to account for the success of the blockbuster TV series Breaking Bad? As long as they remain in the fictional realm, we delight in their ability to exploit our deepest, darkest fantasies of revenge and freedom to release our id without consequence.

Which is why I’ve created Jane Ronson, a private investigator who lives by her own rules and skirts the boundaries of acceptable behavior. Jane never met a bar fight she wouldn’t back down from. And even though she goes through life with her middle finger extended, buried in her psyche is a good person. She loves her dog and protects her vulnerable cousin Lenny (her only living relative) with a savage passion.

That said, I’ve infused my novels Murder in the Dog Park and Dog Spelled Backwards: An Unholy Mystery with humor and just enough humanity to keep Jane Ronson from being a Mike Hammer knockoff. Because all violence and no redemption makes for boring characters.

I hope you enjoy my tough chick heroine as she takes down bad guys with Archie, her bull terrier with a bad attitude. About This Author
Jill Yesko’s 20+ year writing career has included stints as a sport writer, NPR commentator and investigative reporter. She’s written about everything from body piercing to human pyramids in Spain. After a solo trek around the world, Jill was profiled as an “adventurous traveler” in O, the Oprah magazine. Before becoming a writer, Jill was a national-class cyclist and graduate and cartographer. A New Jersey native, Jill now patrols Baltimore’s dog parks with her basset hound.