The Hemingway Book Club of Kosovo 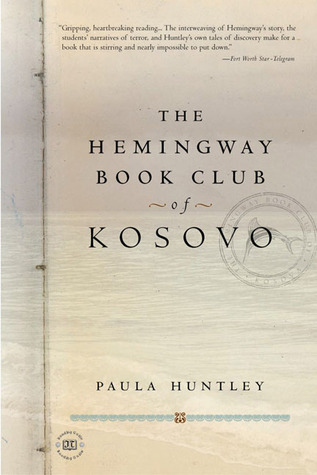 Picture and other information from Goodreads.com

A moving testimony to the power of literature to bring people together in even the most difficult of circumstances.

In the spring of 1999, the world watched as more than 800,000 Kosovo Albanians poured over Kosovo's borders, bringing with them stories of torture, rape, and massacre. One year later, Paula Huntley's husband signed on with the American Bar Association to help build a modern legal system in this broken country, and she reluctantly agreed to accompany him. Deeply uncertain as to how she might be of any service in a country that had seen such violence and hatred, Huntley found a position teaching English as a Second Language to a group of Kosovo Albanians in Prishtina.

A war story, a teacher's story, but most of all a story of hope, The Hemingway Book Club of Kosovo is the journal Hunt-ley kept in scattered notebooks or on her laptop over the eight months that she lived and worked in Kosovo. When Huntley asked her students if they would like to form an American-style "book club," they jumped at the idea. After stumbling upon a stray English-language copy of Ernest Hemingway's The Old Man and the Sea, Huntley proposed it as the club's first selection. The simple fable touched all the students deeply, and the club rapidly became a forum in which they could discuss both the terrors of their past and their dreams for the future.

The Hemingway Book Club of Kosovo is a compelling tribute to the resilience of the human spirit.

I probably would have never read this book if it wouldn't have been chosen by the book club that I recently joined, but I am really glad I read this.  As Paula mentions several times in the book, Kosovars don't know a lot about the world outside of Kosovo, but Americans should know. Unfortunately, a lot of Americans don't know, and I am one of them.  This book was very eye opening to the struggles that people face.  It also shows that ethnic problems exist just about everywhere.  It is amazing that things that happened in the Balkan region in the late 90's and early 00's could happen in today's times.  I highly recommend this book, it will change your thinking about a lot of things.  Great job Mrs. Huntley, and thank you for writing about your time in Kosovo.

I obtained my copy of this book from my Public Library and was not asked to do a review of it.