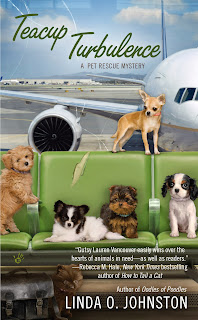 Synopsis
Los Angeles animal shelter manager Lauren Vancouver has a soft spot for animals in need—and a keen eye for crime. . .
Thanks to a savvy ad campaign featuring teacup pups sporting HotPets Bling—a new line of faux jewelry dog collars—small dog adoptions have skyrocketed across the city. So when Lauren discovers a shelter in the Midwest with more toy dogs than it can handle, she arranges a private plane to swoop in and fly the pups back to LA.
But Lauren didn’t count on rescue worker Teresa Kantrim coming along for the ride. Teresa has cared for the dogs since they were found and doesn’t trust anyone from La-La Land to take over the job. Her biting comments clearly haven’t earned Teresa any new friends, but when she turns up murdered, it’s time for Lauren to dig into Teresa’s past and find out who wanted her put down.
My Review:
This was the second book that I have read in this series and it just keeps getting better.  Lauren is a great protagonist, she will do just about anything to keep her pets safe, she is also very good at solving murders.  When some bling collars are being marketed for HotPets, it generates an interest in teacup dogs in the L.A. area.  Lauren learns of a lot of teacup dogs that need rescued from a puppy mill is Missouri.  When the dogs arrive they are accompanied by a worker from Missouri.  When that worker is found murdered at HotRescues, Lauren has to figure out who the killer is so that her Airborn rescues can continue and she can clear her friends of the murder.  In the meantime, she also has to figure out a mystery behind the adoption of some of the teacup dogs.  This book kept my attention throughout.  If you love a good mystery and are an animal lover, then this book is for you.  Great job Linda, I can't wait for the next Pet Rescue Mystery, and I am going to try to read the ones that I have missed.
I received a complimentary copy of this book for my honest review. 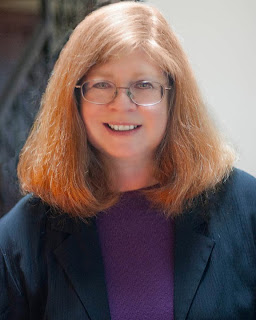 About This Author
Linda O. Johnston’s first published fiction appeared in Ellery Queen’s Mystery Magazine and won the Robert L. Fish Memorial Award for Best First Mystery Short Story of the year. Since then, Linda, a former lawyer who is now a full-time writer, has published more short stories, novellas, and 35 romance and mystery novels, including Harlequin Romantic Suspense as well as the Alpha Force paranormal romance miniseries for Harlequin Nocturne.
Linda’s Pet Rescue Mysteries, a spinoff from her Kendra Ballantyne, Pet-Sitter mysteries for Berkley Prime Crime, feature Lauren Vancouver, a determined pet rescuer who runs a no-kill shelter. In this cozy series, “no-kill” refers to pets, not people!
[Note that, at the time this is being submitted, I've had 33 books published but will have a Harlequin Romantic Suspense published in December, and my upcoming Pet Rescue Mystery TEACUP TURBULENCE will be a January 2014 release.]
Author Links:
Website: www.LindaOJohnston.com
Facebook: https://www.facebook.com/LindaOJohnston
Purchase Links:
Amazon     Book World      B&N