Sharon Pape Sketcher in the Rye Review and Interview 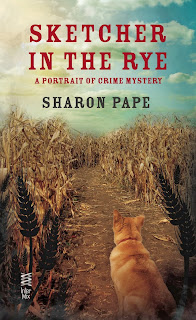 In her new job as a private eye, former police sketch artist Rory McCain has a spirited partner: Old West marshal Zeke Drummond. He may be a ghost, but when these two combine their skills, they reap justice…
Trouble has sprouted at Harper Farms. Top secret info has been leaked to the competition, and now there’s serious sabotage cropping up. So the farm’s beleaguered owner, Gil Harper, has called on Rory to dig up some dirt. But what Rory discovers raises a new field of questions…
Someone shucked Harper’s accountant and left his body in the farm’s corn maze. While Gil is quick to hire Rory to solve now not one but two crimes, the sketching sleuth isn’t so sure why the farmer wants her to focus her attention on his own family.
Regardless, Rory and Zeke will need to put their hands to the plow and solve this case before someone else is planted six feet under…

I really enjoyed the rapport between Rory and Zeke.  Rory has her hands full dealing with a ghost, Zeke, and her rambunctious dog, Hobo, then she stumbles upon a murder.  This is a cozy that kept me guessing till the end.  There is a alot of action and alot going on, not just the murder.  Gil Harper's Farm is being sabotages and he hires Rory to find out who is sabotaging it, in the meantime, his longtime employee, who is like family, Matthew is murdered, so he asks Rory to solve that also.  Filled with lots of suspects and an eccentric cast this is a great read.  Even Zeke is harboring a secret in this story. 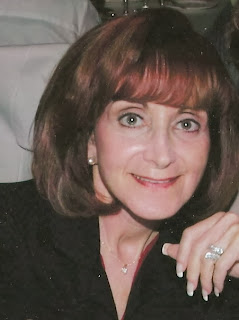 I started writing stories as soon as I learned how to put letters together to form words. From that day forward, writing has been a part of my life whether it was my first attempt at a novel in seventh grade or the little plays I wrote for my friends to perform for neighbors and family. After college, when I was busy teaching French and Spanish to high school students, I was also writing poetry — some of it in French.
After several years, I left teaching to be a full time mom, and when my two children started school, I went back to writing. To my delight I found that the muse was still there, still waiting patiently for me to come around. My first novel, Ghostfire, was published at that time. It went on to be condensed in Redbook magazine (the first paperback original the magazine had ever condensed.) Then came The God Children and The Portal. Redbook also published my first short story, which was subsequently sold to several foreign magazines. With two great kids, a golden retriever and a loving, supportive husband (whom I’d met at the beach when I was fourteen — but that’s a story for another day), I felt like I was exactly where I was meant to be in my life. But fate had another plan for me, and it went by the name of “breast cancer.”
Looking back, I realize how fortunate I was that the cancer was discovered at such an early stage, but at the time it was all very overwhelming. Once I was back on my feet, I wanted to help other women who were newly diagnosed, worried and afraid. I became a Reach to Recovery volunteer for the American Cancer Society and went on to run the program for Nassau and Suffolk Counties on Long Island. A number of years later, with the help of my surgical oncologist and two other volunteers, I started Lean On Me, a nonprofit organization that provides peer support and information to breast cancer patients. When Lean On Me celebrated its tenth anniversary it no longer required as much of my time, and I once again found myself free to pursue my first love — writing.
Find out more about Sharon and her books here: http://www.sharonpape.com/index.html
Purchase Link at Amazon: http://www.amazon.com/Sketcher-Rye-InterMix-Portrait-Mystery-ebook/dp/B00AVA4NH0/ref=sr_1_1?s=books&ie=UTF8&qid=1384291943&sr=1-1&keywords=sketcher+in+the+rye
Puchase Link B&N: http://www.amazon.com/Sketcher-Rye-InterMix-Portrait-Mystery-ebook/dp/B00AVA4NH0/ref=sr_1_1?s=books&ie=UTF8&qid=1384291943&sr=1-1&keywords=sketcher+in+the+rye

Zeke Drummond here. I want to thank Melina for invitin' me over to talk about my early days as a federal marshal for the Arizona Territory. Some of you already know me from my mystery series that folks have come to call "The Sketch Books." If Rory McCain were here, she'd be interruptin' about now to say that she's the actual private detective and I'm just a consultant. She'd be right in that the law doesn't recognize my rights now that I'm deceased these past hundred years or so, but the plain truth remains that I pull my share of the load around here. I've even saved Rory's reckless neck a number of times. She'd argue that fact as well, bein' the  independent, little force of nature that she is. I'm aware that she used to be a sketch artist for the police and got to carry a detective's shield and gun. Still and all that doesn't mean she's bulletproof. But I'm gettin' side-tracked here.


Gettin' back to my work, I oughta start by sayin' that bein' a federal marshal wasn't exactly what I imagined it would be back when I was a kid lookin' for an excitin' life .  Most of the time it was a downright lonely job. If a man's not comfortable with only his horse and himself for company, he won't take to the long, solitary hours and days. At first I didn't see how I was goin' to stick with it, but seein' as how I was raised to finish what I start, quittin' right away didn't sit well. I struck a deal with myself. After six months, if I still wanted out I could leave. As it happened, I made my decision well before that arbitrary deadline.


I was trackin' a couple of bank robbers known as the Skaggs Brothers who'd already hit Tucson. From what I could tell  they were makin' their way to Yuma. I rode into that small town late in the day and found myself knee deep in the middle of their next heist. Frank Skaggs was standin' inside the bank's doorway on the lookout for trouble and he spotted me before I saw him. He tried to pick me off, but he wasn't much of a marksman. I jumped off my horse and took cover behind a buckboard while he called a warning to his older brother. Then Frank grabbed a store clerk who'd had the misfortune to be doin' his bankin'  at that hour. He put his gun to the man's head and walked him out the door so I could see what was at stake. The hostage was quakin' and beggin' for his life. Frank and I were at a standoff for a good minute or two, but then Walter Skaggs ran out behind them with some canvas bags of money and headed for the horses at the hitchin' post. He made a darn good target once he passed the clerk. I took my shot, and Walter went down. Tryin' to get to his brother, Frank lost his grip on the hostage, who had the good sense to run off. That gave me a clear shot at Frank. The hostage was safe, the bank got back its money, and after being treated by the local doc, the  brothers were locked up to wait for the circuit court judge. I felt pretty good about myself. I was hooked.
Posted by MelinaMason at 12:00 AM