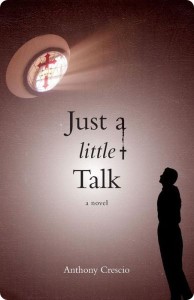 Dominic’s life was drastically changed eight years ago when he was released from prison after serving time for the accident that claimed his best friend’s life and in return destroyed his future.  Traveling through the neighborhood on his way home, rain falls which forces him into a church and an encounter with an old priest who used to know his family.  Together, they relive moments of Dominic’s past which brings up questions about his beliefs in God and Jesus.
Discover how one talk can change a man’s life in Anthony Crescio’s Just a Little Talk.

It is no surprise to anyone to say that today’s world is becoming
more and more secularized with every passing day.  The ideology of
secularism pervades our culture and saturates our senses in nearly
every facet of our lives.  At any moment we can turn on the
television, the radio, log on to the internet, see a billboard sign,
or read a newspaper and see that despite all the struggles our world
faces there continues to be a movement away from God in our society.
Perhaps nowhere is this movement more influential or more obvious than
in the world of entertainment whether in television programs, books,
or most especially the movies we watch.  We are saturated with an
ideology that tells us that we are the center of our own world, that
we are the most important thing in the world and the effects are seen
in the most significant problems our society faces today which range
from abortion, euthanasia, divorce, same sex marriage, the
pervasiveness of binge drinking, to any number of the selfish acts
that take place every day in our lives, the list goes on and on, which
make use out of our neighbor instead of exercising the love of our
neighbor which we are called to naturally as human beings.  By
promoting this ideology of the self, the entertainment industry does a
great disservice to our society today, for naturally the more each of
us makes ourselves the center of our lives the more disjointed we
become as a society.  The major problems we face can all be traced to
this self centered lifestyle, and therefore there is a unique
opportunity for Christian writers, actors, singers, and producers of
entertainment to have a major impact in our world today by providing
the consumer with an alternative option.

Tomorrow’s world is no doubt shaped by the entertainment of today.
Adults and youths alike admire the figures we see depicted in
television and movies as heroes to be admired and imitated.  But what
happens when those heroes are only interested in making themselves
greater, about getting the most for themselves regardless of the
effects on those around them?  Look around you, the answers are seen
in all the problems mentioned above and countless more.  So the
question must be asked, what would our world look like if the
entertainment world was saturated with characters that lived
Christ-like lives, who displayed Christ-like virtue, who simply
exemplified a life of true love?  The answer it seems is quite simple.
If the negative effects the admiration of Godless characters is so
evident, wouldn’t the admiration of God-centered characters be just as
evident?

The answer is most undoubtedly yes.  Therefore, the Christian artists
who work in the entertainment industry have a unique opportunity to
change the world we live in drastically.  This of course means that in
order to have a powerful impact for the better on the world around
them they must exemplify Christ-like virtues in their writing, in the
songs they sing, in the characters the portray, and most importantly
in the way they live their lives.  If today the entertainment industry
takes a step towards Christ, then tomorrow the society we live in will
as well.  For better or worse this is the world we live in today which
is so saturated by technology.  Up to this point that technology has
been used most effectively by those who proclaim a secular lifestyle,
it’s time that Christian artists seize the opportunity at hand and use
their craft to proclaim a Christ-like lifestyle.