An Amish Country Christmas--Review and Interview 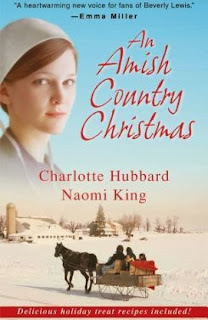 About the Book:
“The Christmas Visitors”: For spirited Martha Coblentz and her twin Mary, the snow has delivered the perfect holiday and birthday present to their door—handsome brothers Nate and Bram Kanagy. But when unforeseen trouble interrupts their season’s good cheer, it will take unexpected intervention—and sudden understanding—to give all four the blessing of a lifetime.
“Kissing the Bishop”: As the New Year’s first snow settles, Nazareth Hooley and her sister Jerusalem are given a heaven-sent chance to help newly widowed Tom Hostetler tend his home. But when her hope that she and Tom can build on the caring between them seems a dream forever out of reach, Nazareth discovers that faith and love can make any miracle possible.
Purchase your copy at AMAZON or at Kensington Books.

This is a book that combines Charlotte/Naomi's two series, the Cedar Creek Series and the Willow Ridge Series.  The first story is The Christmas Visitors, the Kanagy boys, Nate and Bram, travel to Cedar Creek to pick up their new buggy and sleigh.  They meet the Coblentz twins, Mary and Martha.  Mary and Martha invite the boys to stay over the Christmas holiday and to celebrate their birthday.  I didn't really care for any of the characters in this story.  I thought they were all selfish and immature.
The second story in this book, Kissing the Bishop, was a lot better.  It is the story of the Hooley sister's, Jerusalem and Nazareth.  The Hooley sister's are maidel women who think they will never find love.  They are helping out Preacher Tom Hostetler, who Nazareth has feelings for.  But Tom is not free to marry because his wife left him and divorced him, and in Amish Culture, divorce is not allowed and Tom cannot remarry.  His friend, Vernon Geingrich comes for a Bishops meeting.  Sparks fly between Vernon and Jerusalem.  While the foursome is snowed in, Tom receives a letter that gives him some unexpected news.  Will the Hooley sisters finally find love at their age?  I enjoyed this story and read it in no time.  I liked all of the characters in this one.
All in all this was good Christmastime book.  Great job Charlotte/Naomi.
I received a complimentary copy of this book for my honest review. 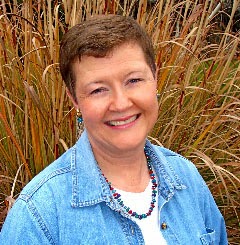 About the Author:
I’ve called Missouri home for most of my life, and most folks don’t realize that several Old Older Amish and Mennonite communities make their home here, as well. The rolling pastureland, woods, and small towns along county highways make a wonderful setting for Plain populations—and for stories about them, too! While Jamesport, Missouri is the largest Old Order Amish settlement west of the Mississippi River, other communities have also found the affordable farm land ideal for raising crops, livestock, and running the small family-owned businesses that support their families.
Like my heroine, Miriam Lantz, of my Seasons of the Heart series, I love to feed people—to share my hearth and home. I bake bread and goodies and I love to try new recipes. I put up jars and jars of green beans, tomatoes, beets and other veggies every summer. All my adult life, I’ve been a deacon, a dedicated church musician and choir member, and we hosted a potluck group in our home for more than twenty years.
Like Abby Lambright, heroine of my Home at Cedar Creek series, I consider it a personal mission to be a listener and a peacemaker—to heal broken hearts and wounded souls. Faith and family, farming and frugality matter to me: like Abby, I sew and enjoy fabric arts—I made my wedding dress and the one Mom wore, too, when I married into an Iowa farm family more than thirty-five years ago! When I’m not writing, I crochet and sew, and I love to travel.
I recently moved to Minnesota when my husband got a wonderful new job, so now he and I and our border collie, Ramona, are exploring our new state and making new friends.
You can visit her website at www.CharlotteHubbard.com
Her latest book is An Amish Country Christmas.
Visit her website at www.charlottehubbard.com.
Connect & Socialize with Charlotte!
FACEBOOK | GOODREADS

Interview Questions for An Amish Country Christmas
How did the idea for AN AMISH COUNTRY CHRISTMAS materialize?
This anthology was my Kensington editor's idea! She thought it would be fun, since both of my Amish series are set in Missouri, to have a story set in each of my fictional towns, with a little mix-and-match between characters. Amish and Christmas are an unbeatable combination, far as generating sales—and I thought it would be a lot of fun to write shorter, perkier stories for the holiday.
The trick? I chose secondary characters whose romances wouldn't confuse readers about the chronology of each series (although having Preacher/Bishop Tom fall in love does affect the story arc of the Willow Ridge series a bit). And by matching up the redheaded Coblentz twins from Cedar Creek with the Kanagy brothers, I had  a "young and restless" story to counterbalance "Kissing the Bishop," where the maidel Hooley sisters, Jerusalem and Nazareth, meet fellows who are worthy of them in midlife. They were fun stories to write.
Who are your favorite characters from you two Amish Series?
That's a tough question! From the Seasons of the Heart series, I love Miriam, Ben, and Jerusalem and Nazareth Hooley the best—they're people I could count on when times get tough. Abby and James from the At Home In Cedar Creek series have remained favorites—although in the newest book, AMANDA WEDS A GOOD MAN (which comes out this November 5th) I have had a ball writing five-year-old Simon Brubaker and Amanda's four-year-old twins, Cora and Dora. Kids that age really liven up a story, and you never know what they'll say or do next.
How do you celebrate Christmas?
We've celebrated Christmas in many ways over the years. We don't have kids, so it's always been easier for us to hit the road—and we've been young/able enough to make the drive to various relatives' homes. I have family near Pittsburgh, PA as well as in Kansas City, MO, while Neal's family lives mostly in southwest IA. Our jobs have taken us away from those areas, so if we're to gather with family, we have to drive or fly. Now that we've moved to St. Paul, MN, the closest relatives are six hours away—and now that we have a recently remodeled home, we encourage family members to visit us, because their kids are grown now and they're better able to travel.
Our celebration always centers around December church services, because I sing in our choir. In our present church, we celebrate at a late candlelight service on Christmas Eve, as well as with a "sacred music" Sunday earlier in December. At home, we decorate with two Christmas trees—one with ornaments from our various vacation trips over the years, and one with ornaments family members, friends, and I have made. I've already baked most of the cookies for this year, because I'll begin sending them to my agent, editors, and far-away family members in early December—about 75 dozen cookies are stashed in my deep freeze right now, and I'll make peanut clusters and peppermint bark to go with those. For me, it wouldn't be Christmas without making those goodies, even during these past few years when I've been so busy writing these two Amish series.
What is your favorite Christmas cookie to bake?
Even though they take a lot of time, I most enjoy baking the cut-out sugar cookies and the cut-out gingerbread cookies (both of these recipes are in the Sugar and Spice section of AN AMISH COUNTRY CHRISTMAS, so you can bake them, too!) I only get out my cutters at this time of year, and because I make about 13 dozen sugar cookies and about 7 dozen of the gingerbread, I make and chill the dough ahead, bake them one day, and decorate them on a Saturday when nothing else is going on. I consider them edible art!
What is your favorite Christmas cookie to eat?
Oh, that's a hard question! Over my years of baking so many kinds of cookies, I've narrowed my baking marathon to only the ones I really love, and the ones that disappear first when I take cookie trays to events. One of my very favorite cookies is a cream cheese macaroon—moist and chewy with lots of coconut! But I also really love the ones with an Andes mint buried inside a soft cookie, frosted in bright colors, with sprinkles! And then there are the sugar cookies and the spicy gingerbread, above—I could go on and on! These recipes are also in AN AMISH COUNTRY CHRISTMAS.
What do you like best about Christmas?

Singing the carols! Going to midnight candlelight service! Opening presents with my Border collie, Ramona, who really rips into her gifts and then helps the rest of us open ours, as  well. And on good days during the Christmas season, I enjoy the more light-hearted, happy sentiments that folks are more likely to express. I have a lot of wonderful memories of when we crammed our family around a crowded table, when I was the only kid there among twenty-some adults...and now it's just an aunt and me left on Dad's side, and I am the eldest left in my mom's family. No matter where we go or whom we see, however, I cherish the holidays I've spent with my husband of more than 38 years. We've come such a long way since we celebrated our first Christmas as broke newlyweds, and we've been truly blessed.