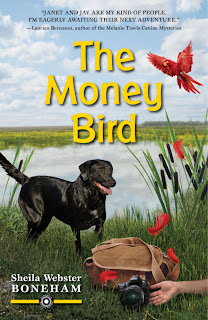 Animal photographer Janet MacPhail knows that trouble is in the air when Labrador Retriever Drake fetches a blood-soaked bag holding an exotic feather and a torn one-hundred-dollar bill during a photo shoot at Twisted Lake. One of Janet’s photography students reports seeing a strange bird at the lake, but he turns up dead before Janet can talk to him. When she learns that the mysterious retreat center near the lake is housing large numbers of tropical birds, Janet is sure there’s a connection and decides to investigate between dog-training classes, photo assignments, and visits to her mom at Shadetree Retirement. With help from her Australian Shepherd Jay and her quirky friend Goldie, Janet is determined to get to the bottom of things before another victim’s wings are clipped for good.
My Review:

This was a very good read.  If you love dogs, then this is a book for you.  Janet has an Aussie named Jay and her boyfriend, Tom, has a Black Lab named Drake.  I learned a lot about dog training from this book and I also learned a lot about exotic birds.  Janet and Tom end up having to solve a crime centered around the smuggling of exotic birds.  This cozy had humor in it also, Janet was somewhat of a smart-aleck at times, but still likable.  Great job Sheila.  I thoroughly enjoyed this read. 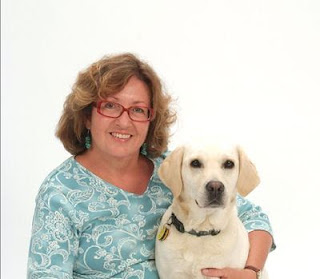 About Sheila Webster Boneham
Sheila Webster Boneham is the author of 17 nonfiction books, six of which have won major awards from the Dog Writers Association of America and the Cat Writers Association. She is also the author of Drop Dead on Recall, the first in the Animals in Focus Mystery series. For the past two decades Boneham has been showing her Australian Shepherds and Labrador Retrievers in various canine sports. She has also bred top-winning Aussies, and founded rescue groups for Aussies and Labs. Boneham holds a doctorate in folklore from Indiana University and resides outside of Wilmington, N.C.
Links
Website - http://www.sheilaboneham.com
Facebook – http://www.facebook.com/sheilawrites
Blog - http://www.sheilaboneham.blogspot.com
Purchase Links:
Amazon

B&N    Book World   Powell’s Books      Book Depository
Cool Option!
If you would like an autographed copy you can place your order here.

Developing the plot of a book is one thing. Developing an ongoing “plot” or arc for a series is something else entirely. In essence, each individual book needs to have its own plot and story arc, but it also needs to fit into a longer “story” that progresses through the sequence of books. There are many ways to structure a series. In the case of my Animals in Focus mysteries, I see three driving forces behind the individual books and the ongoing series “story”—character, animal-oriented activity, and critical issue.


Let’s start with the characters. Fifty-something animal photographer Janet MacPhail, her Australian Shepherd Jay, and her orange tabby Leo are at the heart of the series. Other essential characters include a good-looking anthropologist, Tom Saunders, and his black Labrador Retriever, Drake, who are both “persons of interest” to Janet. Also vital to Janet’s situation and story are Janet's mother (who is battling dementia), Janet's brother, Bill, and his husband, Norm, and Janet's quirky neighbor Golden "Goldie" Sunshine.


The plot of each book in the series revolves around an animal sport or activity and a larger issue.  In Drop Dead on Recall we had dog obedience, breeder ethics, rescue, and runaway competitiveness. In The Money Bird, the activity is retriever training and the larger issue is illegal trafficking in endangered birds. The title, The Money Bird, comes from retriever field competitions but applies to the money made by smugglers as well. There is, though, more to the books than the animals - more on that later.

Although I have known about the horrors of wildlife trafficking for many years, it wasn't until I read Spix's Macaw: The Race to Save the World's Rarest Bird by Tony Juniper a couple of years ago that I immersed myself in books and articles about tropical bird trafficking in particular. The money and illegality made trafficking prime mystery material, and although I try not to beat my readers up with too much information, I do hope that the book may lead some people to learn more about the problem of wildlife trafficking, not only as it affects birds, but mammals and reptiles as well. Retriever training seemed a natural activity for the book because, in addition to Aussies, I've had Labrador Retrievers in my life since 1988 and have done some field training with them. Besides, Janet meets a good lookin' guy with a good lookin' black Lab in Drop Dead on Recall. It just all fit together.

Like many mystery series, other plot threads run through the Animals in Focus books as well. One of the sub-plots has to do with Janet's struggle to deal with her mother's progressing dementia. In fact, since Drop Dead on Recall came out last year, several readers have written to tell me how realistic and sensitive the book's handling of the issue is. The nursing home that Janet moves her mother to uses several innovative approaches, including therapy animals and a therapy garden, which may be of interest to some readers.

Another detail that a number of readers say they like is that the central characters - Janet and Tom - are in their fifties, and Janet's friend Goldie is in her sixties. I was asked at one point to make Janet younger in years because, it was thought, she acts younger than her age. Really? That both irritated and amused me because in many ways, Janet acts like me and my friends, and a lot of us are even older than Janet. This is the way people our age act, folks!

Now I’m wrapping up book three. I won’t say much about it at this point, except that Leo and his ilk get to step even further into the spotlight, and Janet steps into even more trouble. And all the other series threads continue to continue!