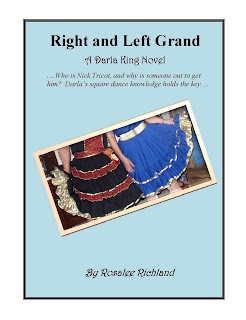 Synopsis
In this first Darla King novel, Darla returns to square dancing in midlife following tragedies in both her personal and professional lives. She moves from Florida to Texas and from high-powered investigator to life in a small town and a job as far removed from crime as she can think of—she becomes a square dance caller. But when an unconscious stranger turns up on the ranch of one of her dance club members, her specialized knowledge may hold the key to the identity of his assailants. At first, Darla is concerned that her friend Doug is the target. When the same square dancer is assaulted not once but twice, she realizes something else is wrong. Even more telling is the secretive but disturbingly handsome FBI agent that enters the picture.
Darla didn’t plan it this way, but her curiosity pulls her into the case and she has to use the investigative skills from her past that she thought she’d left behind. She’s inquisitive by nature, and looks for patterns to unravel it all. Patterns like the ones she uses to choreograph a dance. Combined with her contacts as a square dance caller and her square dance knowledge, she’s just the person to fit all the pieces fit together. Darla, along with her close friends from the Clearton Squares Dance Club, ends up in the thick of things—and in danger.
My Review:
This book was okay.  It has a lot of information about square dancing in it, and I know next to nothing about square dancing.  I found the information hard for me to understand.  Darla was a very likable character, she had a good head on her shoulders.  This story really picked up towards the end.  The mystery in this story didn't really have a whole lot to do with the characters.  I was left guessing up till the end, and I am still guessing a little bit.  The perps didn't really have any contact with the characters and were really strangers.  I guess I like the cozies where the killer is a character, whether major or minor, in the story.  Other than that this book was pretty good.  Good job Rosalee.
I received a complimentary copy of this book for my honest review. 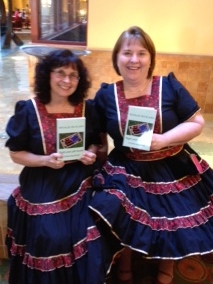 About Rosalee Richland
Rosalee Richland is the pen name of two real-life square dancing writers. As Rosalee, co-authors Cyndi Riccio and Rhonda Brinkmann joined forces to create the Darla King cozy mystery series. Darla and her friends portray the best of the square community, the warmth and friendship among people in it, and the enjoyment square dancing brings worldwide. Darla’s curiosity often puts her squarely in the midst of unusual circumstances, and Darla can’t let go until the mystery is solved.
When not writing, Darla’s co-authors enjoy reading, traveling, meeting readers and fans, networking with other authors, and – of course – square dancing. They are learning to blog, and are always working on Darla’s next mystery. If you have a chance, stop in at a book signing and find out which half of Rosalee shows up! In the meantime you can stay in touch with Rosalee and Darla on on Facebook, Goodreads, or the Darla King Series blog. Or just search for “Rosalee Richland” anywhere in cyberspace.
Online links:
Goodreads/Rosalee Richland:
http://www.goodreads.com/author/show/6577514.Rosalee_Richland
Rosalee Richland on FB:
https://www.facebook.com/pages/Rosalee-Richland/284946448289065
Rosalee Richland blog:
http://rosaleerichland.blogspot.com/
Purchase Links
Amazon