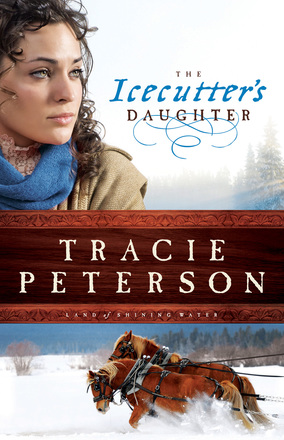 As the lone female in a houseful of men, Merrill Krause dedicates her life to caring for her family and their business, as her dying mother asked. Besides, it suits her; she's never felt like she fits what most people expect in a girl--she'd rather work with her father’s horses and assist with the ice harvest. And though she’s been mostly content up to this point, a part of her wonders if there will ever be anyone who will notice her amid the bevy of brothers determined to protect her from any possible suitors.
When Rurik Jorgenson arrives in their small Minnesota town to join his uncle's carpentry business, he soon crosses paths with Merrill. But unlike other men, who are often frightened away by her older brothers, Rurik isn't intimidated by them or by Merrill's strength and lack of femininity. The attraction between them begins to build...until Rurik's former fiance shows up with wild claims that bring serious consequences to Rurik.
Can Rurik and Merrill learn to trust God--and each other--when scandal threatens their newfound love?

I really enjoyed this book.  I have read some books by Tracie but not a lot, so I really can't compare it to her other books.  This is the story of Merrill, who is the Icecutter's Daughter, and Rurik.  Rurik came Waseca, MN from Kansas to help his uncle run his furniture business.  He was engaged to marry Svea through an arranged marriage by their fathers, but he only has brotherly feelings for her.  She gets mad that he is leaving and breaks the engagement, much to Rurik's relief.  Merrill is the only daughter to Bogart Krause and she feels it is her obligation to take care of him and her four brothers after her mother passed away.  She isn't a girly girl and feels more comfortable in men's clothing than in women's.  After she gets to know Rurik she develops feelings for him, but Svea and her brother Nils, who is Rurik's best friend show up  in Waseca unexpectedly.  Svea announces that the engagement is still on and she also has another secret.  What will Merrill do when she finds out.  Also Nils has some secrets of his own.  This is a very well written book.  I found myself not really liking Svea very much, but then we find out why she is doing what she is doing.  Tracie gave a very good glimpse of what it would have been like to live in Minnesota in those times.  She is a great writer.  Great job, I highly recommend this book.


Tracie Peterson's love for history and research fuel the bestselling stories she writes. She is the author of more than ninety novels and the recipient of the 2011 ACFW Lifetime Achievement Award. Tracie and her family live in Montana.
Posted by MelinaMason at 11:50 AM