Review of Larissa Reinhart Portrait of a Dead Guy 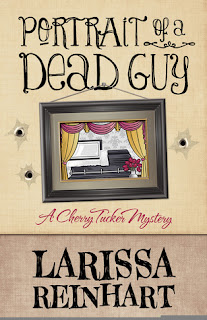 Synopsis:
In Halo, Georgia, folks know Cherry Tucker as big in mouth, small in stature, and able to sketch a portrait faster than buckshot rips from a ten gauge -- but commissions are scarce. So when the well-heeled Branson family wants to memorialize their murdered son in a coffin portrait, Cherry scrambles to win their patronage from her small town rival.
As the clock ticks toward the deadline, Cherry faces more trouble than just a controversial subject. Between ex-boyfriends, her flaky family, an illegal gambling ring, and outwitting a killer on a spree, Cherry finds herself painted into a corner she’ll be lucky to survive.
Purchase links for Amazon:
http://www.amazon.com/gp/product/B0091X7NGQ/ref=as_li_ss_tl?ie=UTF8&camp=1789&creative=390957&creativeASIN=B0091X7NGQ&linkCode=as2&tag=httpwwwabibli-20

I thought this book started out kind of slow, but it soon got my attention.   Cherry Tucker is a very determined sleuth.  She decides to go after a commission to paint a portrait, even though the portrait is of a dead guy.  She gets herself into a lot trouble trying to paint this portrait, so she has to clear her name to get everyone in town to stop talking about her.  I really liked this character.  When she does figure out who the killer was, it is totally unexpected.  Great job Larissa.  I look forward to the next Cherry Tucker novel. 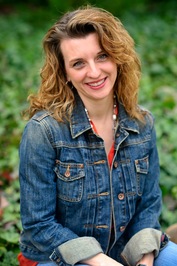 Author Bio:
Larissa loves small town characters with big attitudes, particularly sassy women with a penchant for trouble. Her Cherry Tucker Mystery series, beginning with PORTRAIT OF A DEAD GUY (Henery Press), received a 5/5 Star review from the Examiner.com, is a 2012 Daphne du Maurier finalist, a 2012 The Emily finalist, and a 2011 Dixie Kane Memorial finalist. The second book, STILL LIFE IN BRUNSWICK STEW, arrives in May 2013 followed by HIJACK IN ABSTRACT. A Cherry Tucker prequel will appear in a December 2013 mystery anthology, THE HEARTACHE MOTEL.
After moving around the midwest, the South and Japan, Larissa now lives in Georgia with her husband, daughters, and Biscuit, a Cairn Terrier. When she's not writing about Southern fried chicken, she writes about Asian fried chicken at her blog about life as an ex-expat at http://theexpatreturneth.blogspot.com. You can find Larissa chatting on Facebook on her author page; on Twitter as RisWrites; and on Goodreads. She loves pinning on her Cherry Tucker and other boards at Pinterest.

Posted by MelinaMason at 1:09 AM