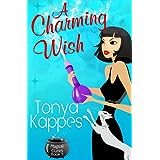 But when a member of the community is found dead on the steps of A Charming Cure, June's homeopathic cure shop, and her fingerprints show up at the scenes of local robberies, she is kicked off the village council and her powers fall under scrutiny. Until it's uncovered who is wreaking havoc on the town...June's magic is suspended.

With the help of a rather obnoxious genie and Mr. Prince Charming, June's Fairy-God cat, June is determined to figure out who is framing her. Time is of the essence when it becomes clear that the true villain is trying to get rid of her...permanently!

Oscar Park will do anything to protect June even if that means giving up all of his magical powers. . .or worse, his life.

This was a witty and charming story.  It has spells and charms and a genie!  June is looking for a bottle to put a potion in when one starts glowing, when she gets it open a genie comes out.  After that, everything goes haywire.  She is made Village President and she is accues of muder and robbery.  She has to use some of her magic to figure out who really commited the crimes.  In the process, her boyfriend denounces his powers.  What is a girl to do?

A very cute read, I finished in a few hours, with a little dirstraction from my son!