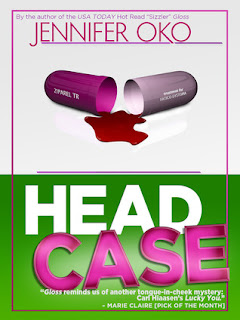 HEAD CASE is a new, exciting and sometimes laugh-out-loud funny mystery from an author whose work has been called "SIMPLY RIVETING" by The New York Times and "SHARP AND FAST-PACED" by Publisher's Weekly. It's like Alice Sebold's The Lovely Bones meets Carl Hiaasen's Nature Girl (with a dash of Janet Evanovich's One for the Money) as Olivia embarks on a postmortem quest to deconstruct the remarkable events that lead up to her mind-altering death.

A comic satire of the influence of the psychopharmaceutical industry on American life, HEAD CASE takes Olivia and her estranged friend and roommate Polly Warner on a collision course involving ethically challenged executives, spotlight-hungry celebrities, third-rate mobsters and drug-dealing babushkas. A smart and savvy page-turner, HEAD CASE explores the meaning of personal relationships, emotional intelligence, and mental health while taking the reader on a synapse-stirring, neurotransmitting rollicking ride.
Show more
Show less
My Review:
I really wasn't too sure about this book when I first started reading it, but it surprised me, it was pretty good.  It has a few curse words in it, but I could deal with that.  It was very well written and flowed really well.  It is told from Olivia's point-of-view, and Olivia is dead.  She starts the story right after she is killed and it goes back and forth from several months before she dies to right before her death and after.  She also figures out how ghosts do things, and helps her friend Polly solve her murder.  Polly thinks that it is all her fault that Olivia got killed, but Olivia helps her see otherwise.  I also kind of like the idea of bringing the abuse of perscription drugs out and that they are as or more dangerous than street drugs.  Usually this type of writing is confusing, but this story isn't.  It takes you right along with it.  A lite read, that goes fast.  I enjoyed it, great job Jennifer.
I received a complimenary copy of this book for my honest review.

Author Bio:
Jennifer Oko’s first book, Lying Together: My Russian Affair (written under her maiden name, Jennifer Beth Cohen), was published in 2004 and received numerous positive reviews. The New York Times Book Review called Lying Together “riveting” and twice named it an Editors’ Choice. The San Francisco Chronicle raved, saying it was “a heady cocktail” and “a quick, juicy read.”Her second book, a satirical novel about morning television news entitled Gloss, was a Marie Claire “pick of the month” in 2007 and chosen as a “hot summer read” by USA Today.Currently working as a freelance writer and media consultant, Jennifer is a “recovering” journalist and award-winning television news producer. A graduate of Columbia University’s Journalism School, her career has taken her across the country and around the world. She now lives with her husband and two young children in Washington, DC.
﻿
﻿

Posted by MelinaMason at 8:16 AM