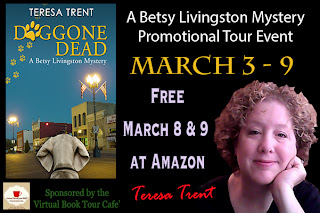 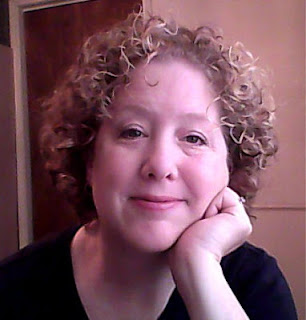 Teresa
Trent wasn't born in Texas but after a few glasses of sweet tea and
some exceptional barbecue she decided to stay. With a father in the
Army, she found herself moved all over the world, settling down for a
while in her teens in the state of Colorado. Her writing was
influenced by all of the interesting people she found in small towns
and the sense of family that seemed to be woven through them all.
Teresa is a former high school teacher and received her degree from
The University of Northern Colorado. Teresa is presently working on
the third book in her Pecan Bayou Series. Her second book, Overdue
For Murder, came out in June of 2012. 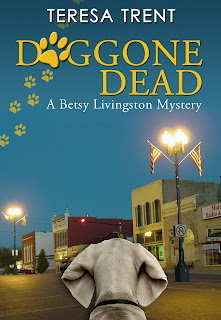 Give
me land lots of land....and a puppy on the loose. When Betsy
Livingston's puppy runs away, she has no idea it will lead her to a
murder on a movie cowboy star's estate. Not only has there been a
murder, but the town reports sightings of the dead cowboy himself.
He's out to seek revenge on all who wronged his daughter who became
the victim of her own money-loving butler. Enjoy a little time on the
Fourth of July in the tiny town of Pecan Bayou Texas where old
cowboys never die...

His little butt
wiggled as his wagging tail seemed to propel him down the street.
Butch looked all around, happy to be exploring. He came upon the
biggest house in the neighborhood, the old Loper home, and shimmied
under two giant wrought-iron gates that joined the large segments of
gray brick walls surrounding the house.
“He went in
the cowboy house!” shouted Zach.
“Butch!” I
yelled out, now grasping the black curlicues of the gate.
“Butch! You
get back over here. Bad dog. Bad dog!”
Butch, not
feeling the guilt, went right on taking time to pee on the historic
fountain, a bronze depiction of Charlie Loper on a bucking bronco
with his six gun shooting into the air. Once he’d finished tagging
the statue, he happily scampered around the back of the house.
I shook the
gate, the sound of metal rattling in our ears. There was a black box
with a speaker and a button ner the bottom. I pushed the button.
“Hello?”
No answer.
I tried the
latch on the gate. It was locked. God forbid someone from the other
side of the park should get in to experience opulent cowboy luxury.
I hit the buzzer
again. “Hello, is anyone in there? I’m sorry, but our dog just
crawled under your fence.”
Again, no
answer.
Zach now slid in
front of me and pushed the speaker button. “Helllllllooooo …”
He elongated his greeting as if yelling into an empty canyon. Feeling
his approach might work, he repeated it.
The black box
rustled. “May I help you?” a clipped British accent came over the
airway. Not exactly the voice you would expect to hear while staring
at a statue of a man on a bucking horse. Whoever this guy in the box
was, he didn’t sound pleased we were pushing his button.
“Yes,” I
answered. “Our puppy crawled under your front gate, and I’m
afraid he’s running around on your grounds.”
Silence. I
waited for around ten seconds until Zach pulled at my sleeve, urging
me to push the button again.
“Are you
there?” I asked. “Sir?”
More silence.
“Sir? Did you
hear what I said? Our puppy has …”
“I heard you,”
he cut me off.
“Have you seen
him?”
“No. I have
not. Please leave.”
I pushed the
button, ignoring the black box’s command. “Are there any other
ways out besides this gate?”
“I have not
seen your puppy,” the increasingly perturbed voice said. “You are
at the only entrance and exit of the estate. You must have been ...
mistaken. Good day.”
We had been
dismissed. Zach breathed in deep and exhaled with a cry. “Where’s
Butch, Mom?”
“I don’t
know, baby. Let’s walk down the block and call for him. Maybe he
got out the other side somehow.”
“But the guy
said …”
“I
know what the guy said.” Upon looking at the grounds inside the
fence a second time, I noticed overgrown foliage around the house.
There was also a line of rust around the fountain. From the street
all you could see was the fountain and paved area around it, but once
you looked inside the gate, the façade of Hollywood elegance fell
flat. The grass was too high, the shrubs looked like monsters from a
second-rate horror movie, and there were no flowers. They might have
an uptown butler, but the place was looking ragged. 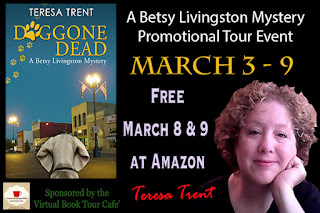 Posted by MelinaMason at 7:23 AM