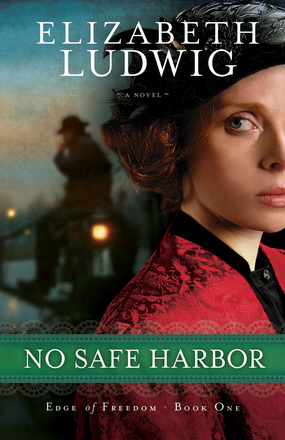 She came to America searching for her brother. Instead all she's found is a web of danger.

Cara Hamilton had thought her brother to be dead. Now, clutching his letter, she leaves Ireland for America, desperate to find him. Her search leads her to a houseful of curious strangers, and one man who claims to be a friend--Rourke Walsh. Despite her brother's warning, Cara trusts Rourke, revealing her purpose in coming to New York.
She's then thrust into a world of subterfuge, veiled threats, and attempted murder, including political revolutionaries from the homeland out for revenge. Her questions guide her ever nearer to locating her brother--but they also bring her closer to destruction as those who want to kill him track her footsteps.
With her faith in tatters, all hope flees. Will her brother finally surface? Can he save Cara from the truth about Rourke... a man she's grown to love?
My Review:
I really enjoyed this book.  It is the first book I've read by Elizabeth Ludwig and it won't be my last.  It had a lot of action and intrigue and at the end it kept you on the edge of your seat.  I really liked the characters of Cara and Rourke.  I routed for them the whole way through the book, and as is the case when GOD is involved, everything worked out for the best.  Cara can to America to find her brother, Rourke was looking for Cara's brother, but they found each other instead.  Now we have to wait till the next book in the series, Dark Road Home, comes out to find out if they find Cara's brother.  Great job, Elizabeth, I really enjoyed it.
I received a copy of this book from the publisher for my honest review.
About the Author:

Elizabeth Ludwig is an award-winning author and an accomplished speaker and teacher. Her historical novel Love Finds You in Calico, California earned four stars from Romantic Times. She is the owner and editor of the popular literary blog The...
Posted by MelinaMason at 11:26 PM