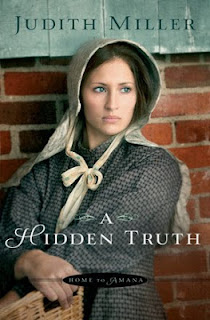 
In the closed communities of the Amana Colonies, hidden truths are about to change everything for two young women....

When Karlina Richter discovers that a new shepherd will be sent to her village, she fears she'll no longer be allowed to help her father with the sheep. She'll be relegated back to kitchen work, stuck inside all day. Her fears increase when the new shepherd shows little interest in the flock--or in divulging why he's suddenly been sent to East. Is he keeping secrets that will impact Karlina's family?

Dovie Cates visits the Amana Colonies to learn more about the place where her mother grew up. But when Dovie begins to ask questions about her mother's past, no one seems willing to reveal anything, so she decides to take matters into her own hands. Will the answers she finds spell disaster for her future plans and the longings of her heart?
My Review:

I've read Judith Miller's other books about the Amana Colonies and I really enjoy them.  It seems like such a simpler time and place to live with everyone having a specific job to to.

I enjoyed A Hidden Truth very much.  It was well written and kept my attention the whole way through, but then, like I said,  I enjoy reading about the Amana Colonies.  It is told form the perspectives of both Dovie and Karlina.

This is the story of Dovie Cates, whose mother recently passed away.  She wants to learn more about her mother's life in the Amana Colonies, so her father agrees that she can go visit  her mother's Cousin Louise Richter.  Cousin Louise is reluctant to tell Dovie a lot about her mothers life in the Colonies, so Dovie finds some letters, that she isn't supposed to read, and forms her own conclusions.
Meanwhile, Louise's daughter, Karlina, is excited about Dovie coming to stay, because she wants to learn more about the outside world.  She also loves to help her father with the sheep and is a little dismayed when the elders decide to send a young man to help her father.  Dovie makes friends with the Baker's son, but is discouraged from spending time with him.  Dovie decides to help an outsider and askes Karlina's help also, will this decision cause Dovie to be sent away and both girls a chance at love?

Great book, I loved it and give it five stars.  I received my review copy from the publisher for my honest review.