Review of Ed Coburn's The Dog Who Ate the Airplane 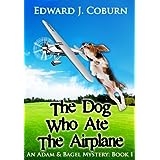 Picture and Synopsis from Amazon.com

Adam Martin Swope was driven out of his beloved Chicago by his self-created but ill-advised celebrity status as a "finder." To avoid the emotional turmoil taking a toll on his psyche, he fled to Cancun, Mexico. Forced back to the United States by the resurgence of his mother's cancer, he decided to take a job as columnist for the Tweet; the newspaper purchased by his long-time friend Larry Archibald in the small West Virginia town of Canary Corners. He moved into the Canary House, an apartment house reputed to have resident ghosts. His next door neighbor Livinia Blossom told him the story of Canary House and introduced him to her grandniece, Marti, who quickly became his semi-constant companion. What Adam didn't realize was how soon his investigative and finder skills would be called into play to solve a murder. He was also unaware of how much assistance his dog Bagel, and the clues he provided, would be during the investigation.

I was asked by the author to read this book and give my honest review and he provided me with my copy.

I liked this book, the only bad thing about this book was, I didn't think it had enough mystery in it.  It tells the story of Adam, who is a finder, and his dog Bagel, who also has psychic ability, and how they ended up in West Virginia, and I like how the author portrayed my home state.  The mystery doesn't happen till half way through the book.  You wonder who did it, but there isn't any suspison thrown on any of the characters in the book.  Adam happens on the killer rather quickly.  I like a little bit more who dunit and was it this one or that one, what would be their motives.  Other than that it was a great book.  It was well written and the main character is a very likable, admirable man.  I would like to see more Adam and Bagel books.  Bagel is an amazing dog.  If you like a gentle mystery then this book is for you.  All in all I say good job Ed.
Posted by MelinaMason at 7:25 AM