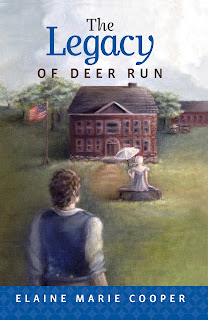 Synopsis from back cover:
The Year was 1800
A young man makes weapons for the defense of America, still a fledgling nation.  He also protects his heart from the allure of a young woman who seems so far above his station in life that he cannot win her.
The lady fights her own war against loneliness and grief.  Despite her finery and airs, she is drawn to the young armory worker, who is distant yet disarming.
Love is not the only entanglement.  The nation's enemies are afoot.  The creep within the very walls where America's defenses are being forged.  Who are they?  When will they strike?  Who will survive their terriorism?
Intrigue of the heart and intrigue of the times are only part of the compelling story--Book 3 of the Deer Run Saga.  This series finale is a gripping mix of romance and deception,  faith and forgiveness, transgression and trial.
My Review:
I have not read any books by Elaine Cooper before, but I really enjoyed this one.  It seemed like once I got into the book, I didn't want to put it down.  It was very well written and flowed very well making for any easy read.  Even though I had not read the first two books in the series, I didn't have any trouble figuring out who was who and how everyone was connected.  I found myself rooting for Danny and Susannah to finally figure out that they belonged together.  Then you had Polly and Jonathan.  I so wanted Polly to let Jonathan know of their predicament and by the grace of GOD everything turned out well.  This was a great Christian read, showing how this family always relied on GOD to help them overcome their  problems.  Great job Elaine.
I received a copy of this book from the author for my honest review. 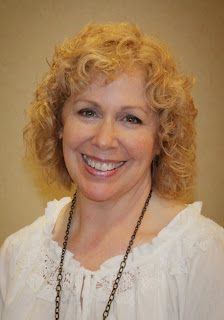 Author Bio:
Elaine Marie Cooper is the author of The Road to Deer Run, Finalist (Religious Fiction) 2011 Next Generation Indie Book Awards, The Promise of Deer Run (Romance Winner for 2012 Los Angeles Book Festival) and The Legacy of Deer Run. Cooper's work can also be found in Fighting Fear: Winning the War at Home and I Choose You, a Christmas anthology (December 2012).
Website:  http://www.DeerRunBooks.com
Facebook: https://www.facebook.com/elainemariecooper
Facebook: https://www.facebook.com/ElaineMarieCooperAuthor
Interview:
Questions for Elaine Marie Cooper
The Legacy of Deer Run
1.  You are an excellent writer.  How long have you been writing and what are your inspirations?
Thank you so much, Melina. I know you review many books so I feel honored by your words! I started writing when I was a child—it just seemed to be a passion to put my thoughts and ideas down into words on paper. I never pursued writing seriously though until a newspaper editor saw some of my writing efforts and she offered me the opportunity to do feature stories. From there I went on to do magazine freelancing. I started writing my Deer Run Saga five years ago and I'm glad I didn't know how labor-intensive that project would be! But I drew inspiration for the story lines from my own ancestors who lived in Massachusetts during the American Revolution.
2.  I live in a community also called Deer Run.  Where did you come up with that name?
As I struggled with the title of the small village that my characters lived in, I dismissed using the actual names of any town. I saw the name "Deerfield" which is near the setting of the story, and remembered the name of my cousin's street in Massachusetts: Deer Run Lane. I've always loved that name and it seemed like the perfect fit. I think it's so fun that it is the name of your community!
3.  Why did you pick this era of history to wirte about?
Since I grew up in Massachusetts, I was surrounded by the history of the  American Revolution. I was fascinated by the details of the battles as well as the people involved and their desire for freedom from England. When I discovered that one of my own ancestors had been a Redcoat British soldier during the Revolution who married an American farm woman, I was amazed and a bit horrified! LOL! However, the romance of the true tale also captured my heart.
4.  I must admit, I'm not really to familiar with the early American era.  Why did they not celebrate Christmas?
That's OK, I understand! In all my research, I discovered how different life was in each colony or state, depending on the heritage of those who settled there. There were colonies that did celebrate Christmas, especially in the south. But the Puritan beliefs of those who lived in Massachusetts influenced their distrust of the Christmas holiday. They made a HUGE celebration of Thanksgiving, however!
5.  Are your characters based on any one?
Yes, my ancestors! They are the inspiration for the original story in "The Road to Deer Run" as well the main characters in "The Legacy of Deer Run." In "Legacy," I knew from family records that my third great grandfather had worked at the Springfield Armory so my research for the story took me to the Armory itself, as well as the museums in Springfield. It was a long and detailed process to get all the historical details accurate. And the characters just seemed to come alive in the setting!
6.  Do you plan on writing any more books for this series?  I haven't read the first two, but after reading this book, I would like to know more about this family.
Thanks, Melina! For right now, the saga is complete, but I never say never. ;-) I have another historical fiction (a stand alone) being considered for publication and a short historical romance that will release in a Christmas anthology called "I Choose You." (December 2012).
7.  What are your interests besides writing?
I love to visit my triplet grandchildren (age 2) and right now I'm crocheting small afghans for them for Christmas. I also enjoy cross stitch, going to movies that inspire, and reading great books. And the most important interest I have is my family: My husband, two grown sons, and their families. Along with my faith in Jesus, my family makes everything worthwhile.

Posted by MelinaMason at 6:50 PM